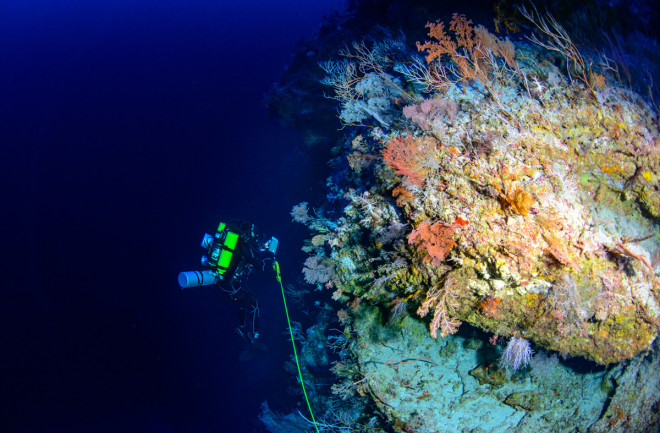 A diver conducting a transect of a mesophotic reef. (Credit: Luiz Rocha © 2018 California Academy of Sciences) The deep reefs that lie out of sight of human eyes aren't similarly shielded from our destructive behaviors. A recent study of mesophotic reefs, those lying between 100 and 500 feet below the surface, finds many of the same issues plaguing reefs at shallower depths. It's overturning previous theories that deep reefs might be protected by virtue of their remote location, and that they could potentially serve as a haven of sorts for imperiled species living in shallower areas.

That assumption proved to be wrong on two counts, says a group of researchers from the California Academy of Sciences which has begun cataloguing the world's deep reefs in detail for the first time. Not only are deep reefs a largely distinct ecosystem, meaning shallow-living species wouldn't fit in, they are just as endangered by climate change, overfishing and other human activities as shallow reefs. It's a sobering find for researchers, who have just begun to study mesophotic reefs in detail. If the world's shallow reefs are any indication, though, they are in significant peril. Nearly 75 percent of shallow reefs are in danger, and researchers recently warned that a third "global bleaching event" was underway. Just this year, researchers reported that half of the Great Barrier Reef had died since 2016, and a recent study finds that it's losing it's ability to recover. Reefs in different environments all over the world are in danger. So, the team's findings shouldn't come as too much of a shock, but they are finally offering real data on an understudied environment. Deep reefs, which require technical diving skills to study up close, are little-studied, and scientists often relied on assumptions, rather than actual data, when predicting what might live there and how they would respond to climate change. Now, the California Academy of Science's Hope for Reefs initiative is beginning to return real data on the species that live in these reefs and how they're doing in a changing world.

Some of the fish species found at the deep reefs. (Credit: Luiz Rocha © 2018 California Academy of Sciences) One of the biggest finds is that species living at deep reefs don't often rise to shallower ones, and vice versa. "Everyone made these kinds of assumptions that ... there was a lot of overlap between shallow and deep," says Luiz Rocha, ichthyology curator at the Academy and Hope for Reefs co-leader. "When we started looking at them we saw that that was not the case." Part of the reason for that, he says, was that scientists hadn't taken differences in water temperature into account when constructing depth ranges. Though a species might prefer water that's 50 degrees Fahrenheit, that temperature will be found at very different depths in the tropics and nearer to the poles. Consequently, species aren't often found all throughout their depth range in a single location, and it means that they have little ability to simply flee to deeper waters when threatened by climate change. Additionally, mesophotic reefs haven't been carefully studied, mostly because it's so difficult to get to them. Rocha and his team must use expensive equipment like closed-circuit rebreathers and endure hours-long decompression stops during every dive. Just two research groups in the world are equipped for this kind of work, Rocha says.

To read more about Rocha's work studying deep reefs, check out our 2017 feature "Easter Island's Reefs: A Harbinger of What's to Come?"

For their most recent study, published in Science, the researchers sailed to different locations across the planet to conduct detailed transects of deep reefs, cataloguing every species they found along the way. Though some researchers have taken a similar approach with submarines and ROV's, an up close and personal approach is crucial for understanding these unique habitats, Rocha says. "Trying to study fish that live on deep reefs with a submarine is like trying to study birds in a rainforest using a helicopter," he says. "It's really not the right tool for the job ... if you really want to see the fish you have to be there, diving." They found that mesophotic reefs are truly their own environment. The mix of species there bore little resemblance to that above, though one similarity did stand out. Human debris, such as plastics and cast-off fishing equipment, and bleached coral were all found as deep as the researchers were able to go, about 500 feet, a discouraging parallel to their shallow counterparts. Looking back, Rocha isn't surprised.

Plastic debris found at a reef in the Philippines at a depth of around 500 feet. (Credit: Luiz Rocha © 2018 California Academy of Sciences) "I think it was more hopeful thinking than anything else," says Rocha. "It's one of those things 'out of sight, out of mind' ... everybody assumed that there was no bleaching." What endangers corals is not warmer water, necessarily, but rapid swings in temperature. And those fluctuations appear to be happening down below as well. Rocha's team is currently undertaking a long-term study of deep reef temperatures to more fully understand the situation. If there's one hopeful result from the study, it's that better understanding the plight of mesophotic reefs will enable scientists to better protect them. Many aren't included in marine protected areas at the moment, and fishing regulations meant to protect shallower reefs don't often help deeper ones. The biggest challenge to protecting such environments, though, may be that so many are likely left undiscovered. Case in point: The massive reef discovered at the mouth of the Amazon River in 2016. Roughly the size of Delaware, the reef lies over 100 feet beneath the sea — many similar deep reefs could exist around the world, unknown to humans, but already in danger.