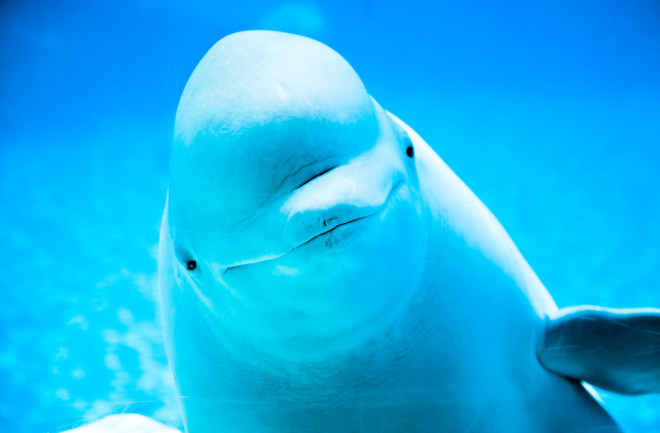 Whales and dolphins have a wide repertoire of ways to communicate with each other, from complex vocalizations to body language and even blowing bubbles. And after watching 44 captive belugas for the past eight years at Marineland of Canada, in Ontario, animal behavior researchers Elizabeth George and Michael Noonan say they’ve begun to decode belugas’ bubble language. They believe beluga whales blow bubbles that correspond to specific states of mind. Their observations raise some new questions about beluga whales’ social lives.

Belugas, George and Noonan say, blow bubbles in four distinct flavors: blowhole drips, blowhole bursts, blowhole streams and mouth rings. A shimmering bubble ring or a handful of little bubbles slowly released from the whale’s blowhole, for example, usually indicates a playful attitude, while large, sudden bursts of bubbles seem to be a warning or a defensive reaction to something startling.

(Credit: wroywu/YouTube) It's impossible to say for certain what is going through a whale's mind, of course, but researchers can draw some conclusions about what a behavior means based on when it happens. Researchers are careful not to anthropomorphize, or assign human emotions to animal behavior. And the findings come with another important caveat: George and Noonan were observing belugas in captivity, not in their natural habitat. Animals in artificial environments may behave very differently than they would in the wild, so researchers have to take observations like these with a proverbial grain of salt. The trouble is that it's difficult to study belugas in the wild, so nearly all research on beluga bubble-blowing so far has been conducted in captivity. George and Noonan's findings match other researchers' observations of captive whales. They presented their findings at the annual conference of the Animal Behavior Society in July, and a more detailed paper is currently under review for publication in the journal Aquatic Mammals.

Sometimes, it turns out, belugas blow bubbles just for fun. “You'll be watching these whales, and they're blowing these rings and hitting them with their flukes,” says George, now a graduate student at the University of Indiana. “We couldn't think of any other reason they could be doing something like that besides play.” Play is a major part of beluga life, according to Noonan, a professor at Canisius College in New York, who says that the belugas at Marineland spend about a third of their time playing.

(Credit: puffinspictures/YouTube) “I think belugas are probably the most playful species ever,” he said. “Certainly the most playful species that I've ever observed in my four decades of animal science.” Like an underwater version of the wizard Gandalf, belugas can blow bubble rings from their mouths. One of the whales at Marineland even blows huge bubble rings and then swims through them, says Noonan. They twist the bubble rings in their mouths, shoot jets of water at them, or swat at them with their tails. And sometimes the whales joined in each other’s games. “It was generally mostly solitary, although there were sometimes cases where a whale would blow a bubble and another whale would pop it,” said George, adding, “That was really fun to watch.”

Young belugas play more than adults, but adult belugas still play around – especially females. Noonan and George noticed that female whales were most often the ones blowing, and playing with, bubble drips and bubble rings. The males, meanwhile, seemed more interested in other forms of social interaction with their fellow males. “You know, they're cruising the pool, maintaining their status, and so they have a little less free time, I guess,” says Noonan. Strong bonds between male belugas are an important part of the whales’ social lives, perhaps second only to the bond between calves and their mothers. Scientists have observed such bonds between male belugas in the wild and in captivity, and George and Noonan say that the strength of beluga male bonding also shows in the way they blow bubbles. About 10 percent of time, when one whale blew a bubble, another nearby whale blew a matching bubble. This so-called synchrony was strongest between mothers and calves, but pairs of affiliated males came in a close second. Beluga researcher Heather Hill, who wasn’t involved in George and Noonan’s research but attended their presentation to the Animal Behavior Society in July, says she has observed a similar difference in how male and female belugas play. “Adult females, and females in general, do seem to be more playful than the males,” she said.

But when adult female belugas blow forceful bursts of bubbles from their blowholes, they’re not playing around. Bubble bursts are usually a reaction to something startling or threatening. In a 2011 study, for example, Hill and her colleagues observed beluga mothers at SeaWorld San Antonio blowing bursts of bubbles to fend off other whales that approached while they swam with their calves. The belugas at Marineland blew bursts of bubbles in response to unexpected loud noises and other startling events, but the adult females in the group blew bursts far more often than their male counterparts. The results came as a surprise to George and Noonan. “We somewhat expected bubble bursts, which is somewhat aggressive and a startle response, to be more typical of the males, but they were actually more typical of the females overall,” says Noonan. The difference may be related to parenting: beluga males have almost no involvement in caring for their calves, while females are responsible for teaching, socializing, and protecting their offspring until they’re old enough to fend for themselves. Researchers say that need for protectiveness may make female belugas more reactive – and more prone to bubble bursts – than males. For calves and juvenile whales, on the other hand, bubble bursts are part of play, especially among males. “The juvenile males were bursting a bit more than the females, so that might be evidence that they might be being a little bit rowdier with each other,” said George.

As much as George and Noonan have learned about belugas’ bubbles, some of the whales’ behavior remains a mystery. Male belugas sometimes swim parallel to each other, blowing steady streams of bubbles, and the researchers aren’t sure why. Humpback whales do the same thing as a way to intimidate each other when competing for mates, but in belugas, the parallel swimming seems to be a friendly gesture. “In belugas, the males will swim parallel to each other blowing streams in contexts that don't look aggressive at all, and they don't go on to struggle, they don't go on to fight, they just swim along next to each other blowing streams,” says Noonan. George added, “We think it might be some sort of affiliative behavior. I never personally saw any instances of aggression between the adult males.” “I agree completely that the bubble streams observed during these interactions are amicable and not aggressive,” says Hill, who will be presenting her findings at the Society for Marine Mammalogy Conference this week. Her group’s recent observations found that bubble streams are part of a set of behaviors that belugas to build and maintain relationships, from courtship to friendly bonds. Belugas are seasonal breeders, so Noonan plans to watch the male belugas’ behavior carefully this spring as their mating season begins, looking for changes in behavior that could shed more light on the purpose of parallel swimming. “It’s our biggest mystery, and it’s one that we’re very anxious to sort out,” he said.