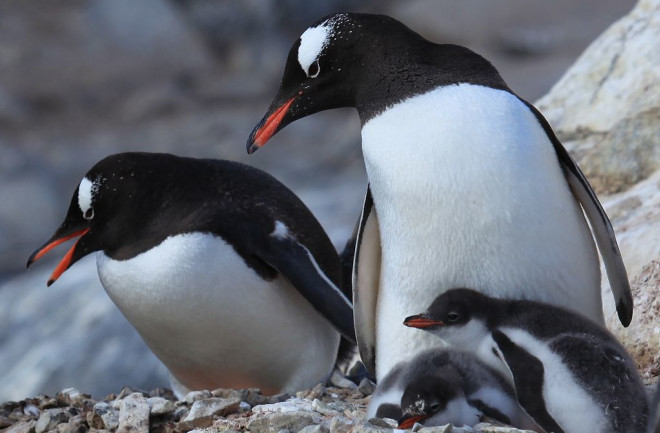 A family of gentoo penguins. (Credit: Wikimedia Commons) Over the past 7,000 years, as mighty civilizations rose and crumbled, another saga was playing out in the southern reaches of the world. Just off the tip of the Antarctic Peninsula, a colony of gentoo penguins have long made tiny Ardley Island their home. At times, the colony rose to a mighty power, holding absolute dominion over the mile-long strip of land their forefathers swam, waddled and slid their way to some time around 5,700 B.C. But, nature deals harshly with hubris, and the penguins were laid low by not one, but three volcanic eruptions. Despite this, they return.

A History Written in Guano

It is only recently that researchers pieced together the tumultuous history of the Ardley Island penguins, some 10,000 of which currently inhabit the island. Unable to elicit much from the penguins themselves, a team of scientists led by researchers from the British Antarctic Survey turned to a method more commonly found in geology: core samples. By digging deep into the sediment, they reached almost 7,000 years into the past by sifting through millennia of penguin guano. In effect, it's a history written by poop. They published their findings Tuesday in Nature Communications.

Gentoo penguins waddle along a "penguin highway" that takes them to the shore — and offers them an escape route. (Credit: Wikimedia Commons) With current population levels, they estimate that around 139 metric tons of guano gets distributed over the island every breeding season. Now, multiply that by 7,000, and you've got an idea of how much guano they sifted through. Researchers analyzed the chemical composition of the cores to track how the penguin population changed over time and pinpoint when they first colonized the island. This is how they arrived at a 7,000-year timeline, pushing about a thousand years past fossil evidence of widespread penguin colonization on the peninsula. The cores also revealed five points at which the population swelled to its maximum size before quickly plunging. Broadening their search to include environmental records from the period, they identified one prominent player in three out of these five catastrophes: Deception Island.

Not Actually An Evil Geniuses' Lair

An 1829 map of Deception Island. (Credit: Wikimedia Commons) Located to the southwest of the penguin colony, Deception Island conceals a secret. While it appears to be solid land when viewed from the sea, the island is actually a massive ring that shelters a placid harbor once used by whalers as a safe haven during storms. But, these calm waters aren't as tranquil as they seem. For, at the bottom of the harbor lies a fiery gash in the earth, still belching fire and steam. Deception Island is actually the five-mile-wide caldera of an active volcano. A massive eruption 10,000 years ago excavated a massive pit and formed the surrounding ring, and the volcano is still considered to pose a significant threat. Over the past 50 years, the fitfully slumbering beast has forced the evacuation of two scientific outposts on the island as unpredicted eruptions caused mud flows that tore through their compounds. But back to those penguins. Using evidence from their cores, the researchers tied three major extinction events on Ardley Island to volcanic eruptions from Deception Island, as evidenced by the presence of ash in the cores concurrent with the die-offs. The only other known active volcano in Antarctica is Mount Erebus in the middle of the continent. While the volcano is far enough away that it likely wouldn't directly affect the colonies, the massive plumes of ash it threw off were enough to blanket Ardley Island in toxic ash, which could have smothered the penguins, especially young chicks too small to escape into the open ocean. According to their estimates, the penguin colony was almost extinguished each time the volcano roared to life and took anywhere from 400 to 800 years to recover. Each eruption seems to have come just as the penguin colony was nearing the size it is today, driven by warming temperatures similar to those we are currently experiencing. The Deception Island volcano is still very much active, and last shuddered in 1991. It looks like the last major extinction on the island happened around 2,000 years ago, probably long enough for the penguins to grow complacent. But, under the ground, signs of danger churn.