Decay of enamel-forming gene linked to evolutionary loss of enamel

The natural world is rife with leftovers. Over the course of evolution, body parts that no longer benefit their owners eventually waste, away leaving behind shrivelled and useless anatomical remnants. The human tailbone is one such example. Others include the sightless eyes of cavefish that live in total darkness, the tiny spurs on boas and pythons that hint at the legs of their ancestors, and the withered wings of the Galapagos cormorant, an animal that dispensed with flight on an island bereft of land predators.

Animal genomes contain similar remains. Just like organs, genes also waste away if they stop being useful. They accumulate crippling mutations that kill their ability to make proteins and turn them into functionless "pseudogenes". They have no useful role other than to tell inquisitive geneticists about their histories.

So organs can degenerate and genes can decay. The two processes should clearly run in parallel, but there are few documented examples of this. Robert Meredith from the University of California Riverside, has uncovered just such an example, a beautiful case study where the decay of a gene called enamelin clearly parallels the loss of a body part - tooth enamel.

Enamel is an extremely tough material that coats the outside of our teeth. Many proteins are essential for making it, including the aptly named enamelin, which is produced by a gene of the same name. Meredith's team sequenced the enamelin gene (ENAM) in 20 species of mammals that either have teeth without enamel caps (like aardvarks, sloths and armadillos) or that lack teeth altogether (like anteaters, pangolins and several whales).

Today, every single one of these species has a broken version of enamelin. Mutations have crept into these genes, which stop the production of the protein before it's fully formed. The result is a busted gene that produces a runty, useless protein. Other mammals don't suffer from this problem; Meredith found that ENAM is fully functional in 29 other toothed mammals, including cats, cows and dolphins.

This is exactly what you'd expect, but the clear link between the lack of enamel and a broken enamel-producing gene is exciting nonetheless. It's a tale that, in Meredith's own words, provides "manifest evidence for the predictive power of Darwin's theory". 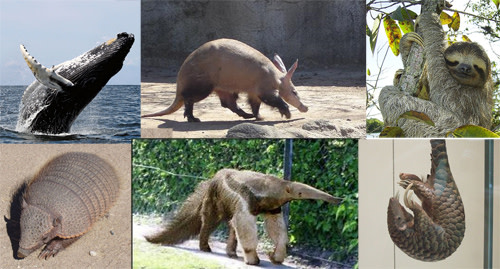 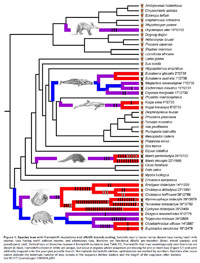 The team also built a family tree of all these ENAM sequences to look at the way the gene evolved in different lineages, and to reconstruct its history throughout the mammal group.

Of the two types of changes, non-synonymous ones are much rarer in genes that serve a beneficial purpose. Tinkering with such genes is often a bad idea, so they're typically more constrained in how they evolve - this is called "purifying selection". That was certainly the case for the mammals that still had enamel and working copies of enamelin. In their lineages, ENAM had picked up about twice as many silent synonymous mutations as protein-changing non-synonymous ones.

But things were different among mammal groups that eventually lost their enamel. Their versions of ENAM had picked up equal proportions of non-synonymous and synonymous changes. The evolution of this gene had clearly been relaxed in these groups - it's what scientists call "neutral selection".

Meredith also used his enamelin family tree to estimate when the gene would have changed enough to render it useless in each lineage of mammals. Based on these estimates, he has predicted how far back you would have to go to find members of each group that still had enamel.

For aardvarks, you'd have to go back at least 29-35 million years before finding a species that still had enamel. For pangolins, you'd have to look even further back to around 55-59 million years. So far, the oldest known aardvark and pangolin fossils are much younger than that. As predicted, none of them have any enamel but to really confirm Meredith's predictions, fossil-hunters will have to find older representatives from both groups. Fortunately, those fossils should exist - enamel is the hardest substance in the mammalian body and it has a tendency to fossilise well.

M, ore on teeth and jaws: