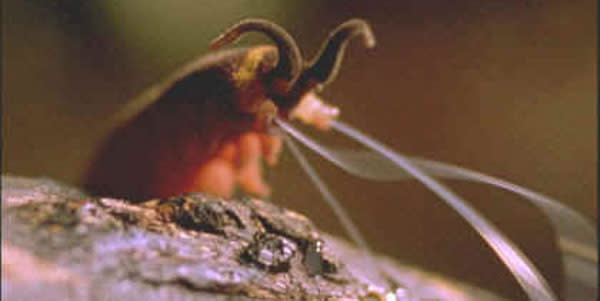 In the Spider-Man comics, the titular hero ensnares criminals by shooting lines of sticky liquid from devices in his hands, which quickly harden into solid threads. In the real world, a group of animals called velvet worms use a similar technique for a more sinister purpose – to trap their prey. Unlike Spider-Man’s synthetic webs, a velvet worm’s glue is entirely biological and an Australian scientist Victoria Haritos has uncovered its secret. This is an animal that uses disorder as a weapon. Velvet worms, or onychophorans, are some of the oldest animals to walk the Earth. They were ambling around 500 million years ago, when most life was still confined to the oceans. They look like caterpillars but they belong to a completely separate group from the insects that they hunt. Their weapons are a pair of limbs on either side of their heads that have been converted into slime guns. They shoot slime that immobilises prey, giving a velvet worm enough time to sidle up and inject its victim with digestive enzymes. The slime is incredible stuff. It leaves the worm’s nozzles as twin streams of sticky liquid. But once it touches the target, it hardens almost immediately into a stiff, hard gel that is neither sticky nor soluble in water. It’s an incredible transformation and for the prey, it’s a fatal one. By ‘milking’ an Australian velvet worm called Euperipatoides rowelli and studying its slime, Haritos has discovered that its properties come from a special type of chaotic protein. Proteins are long chains of amino acids that typically fold into complex three-dimensional structures. The exact sequence of amino acids determines the form that this molecular origami will take. One mistake can render the protein useless. But the velvet worm’s slime proteins have evolved to be disordered – while other proteins are like tangled bundles of uncooked noodles, those in the slime are like the cooked sinuous strands. These proteins are loaded with amino acids that repel one another, and they’re short of the water-repelling ones that help other proteins to establish a solid core. Rather than folding, they adopt open and random structures that are extensively coated with water molecules. Indeed, when the slime leaves the velvet worm’s nozzles, it consists of 90% water and just 3-5% protein. Their watery sheaths prevent the protein molecules from interacting with one another. They can only do so when the water disappears. And that’s exactly what happens when the slime hits its target. Insects are covered in waxy, water-repellent shells, but the velvet worm’s slime contains fat and detergent molecules that break past this defence. These chemicals, and the sheer force with which the slime is shot, means that it spreads all over the victim. The insect’s struggles seal its fate by drawing the slime into threads. Spread over a large surface area, the water in the slime quickly evaporates, unsheathing the proteins and leaving them to mingle for the first time. They form tight chemical bonds with one another and the once-liquid slime hardens into a gel. Until now, scientists thought that the slime contains long, highly structured proteins that were probably like collagen. It was a decent guess, but the reality is very different and no other animal uses biological glue that works in the same way. The proteins within the silk of spiders, for example, are highly structured – a long way from the disordered mess within the velvet worm’s slime. As far as chemical weapons go, it’s a one-of-a-kind innovation. Reference: Proc Roy Soc B http://dx.doi.org/10.1098/rspb.2010.0604More on incredible predators: