Dawn of the Picasso Fish 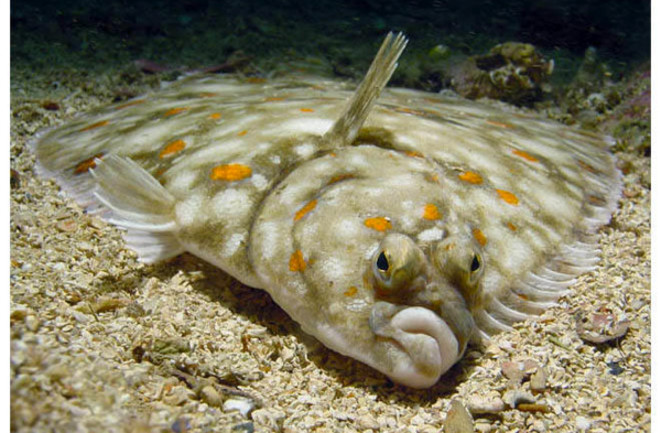 Sometimes a species is so complex, so marvelous, or simply so weird that it's hard to imagine how it could have possibly evolved by natural selection. Among the weirdest is the flounder. Not many animals would be at home in a world made by Picasso, but the flounder would fit right in. It belongs to a group of fish called flatfish, or pleuronectiforms, that all spend their adult lives hugging the sea floor, where they ambush smaller fish. Flatfish are teleosts, a huge group of fish species that include more conventional creatures like trout and goldfish. While they have a lot of teleost anatomy, flatfishes also have some bizarre adaptations for their life at ninety degrees. All vertebrates, ourselves included, use hair cells in the inner ear to keep ourselves balanced. In most flatfish species, the hairs have rotated so that swimming sideways feels normal to them. Many flatfish can camouflage the upward-facing side of their body. The underside is pale, and in many species the fin is tiny. And then, of course, there are the eyes. On a typical teleost like a goldfish, the eyes face out from either side of its head. On a flounder, both eyes sit on one side, gazing upwards. It takes time for this Picasso-esque anatomy to emerge: flatfish are born with eyes in the normal position, but as they grow, one eye moves across its head to join its partner. To accommodate this migrant, the bones of the flatfish head twist and turn to make room. When Charles Darwin published the Origin of Species in 1859, a number of critics took him on, but none more seriously than a British zoologist named St. George Jackson Mivart. In 1871, Mivart published a full-scale challenge to evolution by natural selection, called On the Genesis of Species. In one of his attacks, Mivart wielded the flatfish:

In all these fishes the two eyes, which in the young are situated as usual one on each side, come to be placed, in the adult, both on the same side of the head. If this condition had appeared at once, if in the hypothetically fortunate common ancestor of these fishes an eye had suddenly become thus transferred, then the perpetuation of such a transformation by the action of "Natural Selection" is conceivable enough. Such sudden changes, however, are not those favoured by the Darwinian theory, and indeed the accidental occurrence of such a spontaneous transformation is hardly conceivable. But if this is not so, if the transit was gradual, then how such transit of one eye a minute fraction of the journey towards the other side of the head could benefit the individual is indeed far from clear. It seems, even, that such an incipient transformation must rather have been injurious. [Emphasis mine]

How exactly an early flatfish eye would have hurt the animal, Mivart didn't say. In general, Mivart was more interested in the fact that intermediate forms of traits didn't seem to be useful. What good was half a wing to a bird, he wondered. What good was an eye that hadn't made it all the way around a flatfish's head?

Darwin took Mivart very seriously, and in 1872--the year after On the Genesis of Species came out--he took on Mivart's arguments in the sixth edition of the Origin of Species. Mivart, he argued, wasn't thinking carefully enough about what could or could not evolve by gradual evolution. He agreed with Mivart that flatfish did not evolve in a sudden change. But he could envision a way in which the fish could have evolved in a series of steps. He had read how young flatfish--with normal eyes--sometimes fall to the sea floor and then twist their lower eye upward to see above them. They seem to strain their lower eye, twisting it as far as possible. At this point in his life, Darwin was warming to Jean Lamarck, the French naturalist who had proposed an earlier theory of evolution in 1800. Lamarck had argued that an animal's body changed through its experiences, and that those changes could be passed down to its offspring. Natural selection, Darwin's great discovery, depended instead on pure inheritance. Nothing we do in our lives changes the inherited traits we pass down to our offspring. But Darwin struggled with the mystery of heredity. Over time, he became more open to Lamarck. And so he offered a surprisingly Lamarckian explanation of creeping flatfish eyes. The more the young flatfish strained their lower eyes, he suggested, the more it migrated during its development towards the other side. He wrote,

We thus see that the first stages of the transit of the eye from one side of the head to the other, which Mr. Mivart considers would be injurious, may be attributed to the habit, no doubt beneficial to the individual and to the species, of endeavouring to look upward with both eyes, while resting on one side at the bottom.

Natural selection had driven the eye further, Darwin proposed. "For all spontaneous variations in the right direction will thus be preserved; as will those individuals which inherit in the highest degree the effects of the increased and beneficial use of any part. How much to attribute in each particular case to the effects of use, and how much to natural selection, it seems impossible to decide." By the early 1900s, as scientists began to understand how genes work, they realized that mutations could fuel natural selection. But some biologists still argued that evolution might proceed by giant leaps. In the 1930s, the German biologist Richard Goldschmidt argued that small mutations might produce what he called "hopeful monsters," some of which might prove to be well-adapted to their environment. For Goldschmidt, flatfish looked like promising candidates for a hopeful monsters. After all, he pointed out, no one had found a transition between ordinary fish and flatfish. Perhaps, Goldschmidt suggested, it had only taken a single mutation to launch a fish eye on its journey across the skull, and the basic flatfish anatomy emerged in a flash.

Flash-forward another seventy years. A graduate student at the University of Chicago named Matt Friedman was starting to research his dissertation on the diversity of teleosts. While paging through a book on fish fossils, he noticed a 50-million year old specimen called Amphistium. Like many fish fossils, this one only showed the bones from one side of the animal. It was generally agreed that Amphistium belonged to some ordinary group of teleosts, although biologists argued over which one. But Friedman saw something different. To him it looked like a flounder. Amphistium might not have the lopsided eyes of a flounder (it was hard to see just what its eyes looked like), but it did share subtler traits with flatfish. All flatfish, for instance, have prongs on some of their vertebrae that bow forward in a peculiar and distinctive way. So does Amphistium. To see if he was right, Friedman began traveling to museums around Europe to look at their Amphistium fossils. When he found an intriguing specimen still encased in rock, he had it run through a CT-scan so that he could see its skull. He discovered that Amphistium shares many traits with flatfish found in no other fish. Most striking of all Amphistium's anatomy was its pair of eyes. On one side, the eye sat in its normal teleost position. But on the other side, the eye sat high on the fish's head. In other words, this was a fish Mivart had said could not have existed. Here's Friedman's drawing of the beast from both sides:

This was not a freakish deformity, Friedman realized as he looked at more and more Amphistium fossils. And since they were adult fish, not juveniles, the fossils could not be showing developing eyes still drifting from one side to the other. Intriguingly, though, some Amphistium had a higher left eye, while others had a higher right eye. In most living flatfish, each species only develops its eyes on one side or the other. Friedman also wondered if Amphistium was not a transitional early flatfish, but instead a flatfish that had evolved an eye that had moved back to its original side. But he was able to reject that possibility when he traveled to Vienna to look at another Amphistium fossil. It turned out not to be Amphistium at all, but a separate species altogether. He named it Heteronectes. Heteronectes lived around the time of Amphistium, and it also had a lot of traits seen only in flatfish. It also had one eye sitting high on its head. But a careful comparison of Heteronectes to living and fossil fish revealed that it was missing some traits found only in Amphistium and living flatfish. In other words, Heteronectes, Amphistium, and living flatfish all share a close common ancestor. Heteronectes belongs to the first lineage to branch off from that ancestor. Later, the ancestors of Amphistium and living flatfish split. In other words, the two oldest branches of flatfish relatives had the same intermediate eyes. Here's a slightly simplified evolutionary tree Friedman has prepared:

Nature has just published Friedman's report on his flatfish research. [Note: it may take a while for this link to go live.] In a common ancestor of Heteronectes, Amphistium, and living flatfish, he argues, one eye began to move upward. Friedman proposes that at this early stage, proto-flatfish were lying on the sea floor at least some of the time. They propped themselves up a bit with their downward-facing fins, so that they could see a little with their downward facing eye. Mutations arose that produced eyes sitting higher on their heads. Natural selection favored them because they gave the fish better vision. Even with one eye midway up their head, the early flatfish thrived as predators. (Friedman found one fossil of Amphistium with the skeleton of another fish in its stomach.) But flatfish evolution did not grind to a halt once both eyes ended up on the same side of the head. It turns out there's a living fossil flatfish on Earth today, known as Psettodes. (There are three species in this genus, found in the Indian and Pacific Oceans.) The ancestors of Psettodes branched off from all other living flatfish long ago. Intriguingly, some Psettodes put both eyes on their left side and some on their right--the same loose variations found in fossil flatfish. They even swim vertically like other teleosts, because they have fins on both sides of their bodies. Friedman argues that the full-blown flatfish body did not emerge until after Psettodes branched off--more evidence of the steps by which this weird kind of creature evolved. Amphistium and Heteronectes now join the transitional fossil hall of fame, along with a fish with limbs, Tiktaalik, and the limbed cousin of whales, Indohyus. They're also a reminder that the argument, "It can't possibly have evolved because I can't imagine it evolved" is not an argument at all. It may be hard to imagine Amphistium and Heteronectes, but they are real. In fact, they've been sitting around in museums for centuries, waiting for someone to recognize their true wonder.

[Update: For other takes on the fossil flatfish, see Ed Yong.]

Kåre Telnes. Reproduced with permission from the Marine Fauna Gallery of Norway]