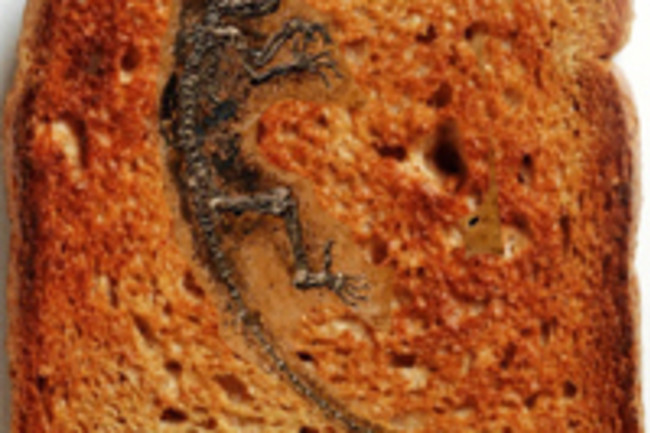 Yesterday, the entire world changed noticeably as the media, accompanied by some scientists, unveiled a stunning fossilised primate. The creature has been named Darwinius masillae, but also goes by Ida, the Link, the Chosen One and She Who Will Save Us All. The new fossil is remarkably complete and well-preserved, although the media glossed over these facts in favour of the creature's ability to cure swine flu. Ida was hailed as a "missing link" in human evolution, beautifully illustrating our transition from leaping about in trees to rampant mass-media sensationalism. Speaking to a group of international reporters, the scientists who discovered Ida described the animal in painstaking detail to the sound of Wagner's Ride of the Valkyries played from 50-foot speakers. As a barrage of fireworks launched in the background, one journalist said, "The release of 30 doves just at the right moment really helped to drive home the unique paleoecological perspective that Ida provides." Evolutionary biologist Stephen Wilton added, "Ida has been waiting for us for 47 million years so I'm grateful that the publication of the paper wasn't rushed and that the whole thing didn't turn into some sort of media circus. You never know when that might happen." Businesses around the world are also hoping that demand for Ida merchandise will stimulate an ailing global economy out of recession. Retailer Bud Hornblower said, "We're seeing a massive spike in demand for fainting couches as ordinary lay people fail to cope with the total change brought on by this small, weird-lookin' monkey thing." Scientistsandpeoplewho actually know a thing or two about evolution warned of hype and exaggeration but were forced to abandon their reason and critical analysis in the face of incontrovertible speculation that Ida could convert base metals into gold and has already led to the invention of flying cars. "I didn't believe it at first," said Professor Adam Templesmith from the University of Slough. "When I read the press release about a fossil that would change everything, I naturally assumed that it was some sort of poorly conceived and overly exaggerated PR claim. But now that the total reversal of climate change is underway, I'm forced to reconsider my prejudices." Already the star of her own website, book and documentary, little Ida will soon have her own action figure, underwear range, three-album deal and seat in Parliament. "Ida's brand is a hot as Obama's right now," said Don Chumleigh, market analyst. "I'm just sad that her fossilised hand isn't doing that fist-bump thing." Recreated through CGI, Ida is also set to play a pivotal role in the climax of the new Harry Potter film, where she will be voiced by Keira Knightley and wield a powerful 'Changus Totalus' spell. Special effects will also be used to insert Ida into previous seasons of the Wire and past G8 summits. Around the world, signs that everything has changed have already begun to appear. Jeanette Gould from Stoke-on-Trent was shocked to discover the outline of Darwinius emblazoned on her morning toast. "Well, it ruined breakfast," said Ms Gould, failing to appreciate the detail of the creature's stomach contents outlined in bread crumbs. "I couldn't very well spread raspberry jam over the direct ancestor of my children, could I?" For actual details about Ida, look no further than excellent takes from Brian Switek, PZ and Carl Zimmer. Brian in particular has serious reservations about the paper itself. I'm too weary to tackle it.