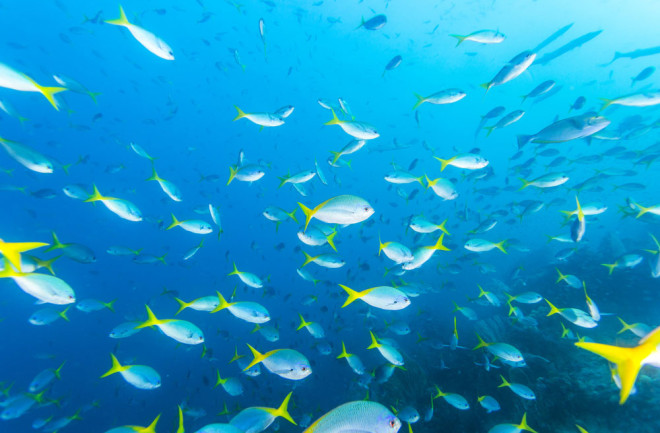 (Credit: Shutterstock) A swarm of schooling fish appears to move as a single organism as it fluidly pivots and flips to flee from approaching predators. In many species, these tightly synchronized turns are coordinated through a shared turning bias—a tendency for fish to turn right more often than left, or vice versa. Having an automatic side bias may allow fish under attack to bypass the neural processes that precede the decision to escape left or right. As University of Saskatchewan biology professor Maud Ferrari notes, for a fish in imminent danger, “a millisecond may be the only thing separating life from death,” so any means of hastening one’s response is worthwhile. The bias may also serve to keep startled fish from unwittingly evicting themselves from their group when evading predators. Yet the oceans are swimming with rebel fish that run counter to their peers when faced with a threat. They lurk, for instance, among schools of yellow-and-blueback fusiliers—a fish that can be found darting around coral reefs in the Indian and western Pacific Oceans. If a shared turning bias arises as a means of thwarting predators, some researchers have reasoned that the phenomenon should disappear in a predator-free environment. Ferrari and her colleagues put this idea to the test.

When they brought yellow-and-blueback fusiliers inhabiting the Great Barrier Reef back to the lab, the fish—fresh out of the ocean—tended to favor right turns. But after just five days living in tanks, safe from predatory groupers, snappers, and barracuda, the researchers noticed that the fish had lost their rightward inclination. The predator-free environment appeared to release them from their turning biases. The newly unbiased fish were then faced with a predator—or rather, a perceived predator, which the researchers simulated by dispensing a solution of the chemical substance that fish secrete when they are alarmed into the tanks. This substance normally alerts group members to a predator in the vicinity. And the fusiliers responded to this heightened perceived risk accordingly: every single fish developed a turning bias after five days of exposure to the alarm cue. It all seemed to line up nicely with expectation, but there was a catch: not all fish had become biased in the same direction. Some were veering right, while others were veering left; and this put some fish in direct turning conflict with other members of their schools. The outcome was intriguing, especially after the researchers released a mock predator above the water’s surface, startling the fish below and eliciting an escape response. The experiment revealed that those whose turning biases were at odds with the majority of the group were slower to flee from danger.

Rebels With a Clue

Though non-conformist fish clearly suffer disadvantages, they may have good reason for turning counter to their peers. Ferrari suggests that although the strength of a turning bias can change, the direction of that bias for any given fish may be constrained by “some underlying cognitive limitation.” It may be that every group harbors a mix of lefties and righties, but their opposing biases only become apparent in a high-risk environment. Or perhaps a few highly influential fish determine the group’s direction, and clashes among these influencers spark larger conflicts that echo through the entire school. Predators themselves may also play a part in maintaining opposing turning biases among their prey. “If every individual always turned the same direction, then it would be rather easy for predators to predict the behavior of prey,” the researchers write in Proceedings of the Royal Society B. Even more puzzling for the researchers, however, was the fact that during the experiments, many fish initially lacking a clear turning preference gained pronounced biases in a matter of days. These left and right biases are traditionally thought to reflect asymmetries in the brain. But, as Ferrari contends, “the brain is surely not restructuring itself over such short timeframes.” “That ends up raising questions about what really controls such biases,” she says.