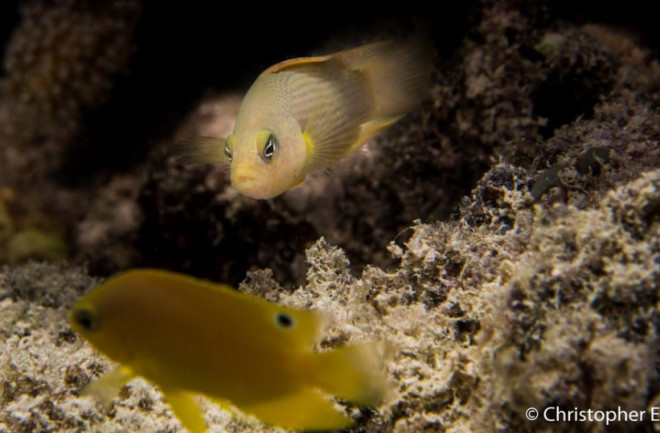 A dusky dottyback considers whether the damselfish will fit in its mouth. Photo by Christopher E. Mirbach Life as a damselfish is hard. These small species are common on tropical reefs worldwide, eating tasty plankton and nipping at other fish. They're known for their attitude and their beauty, and are often found in stunning schools that cluster around coral heads. But while they're abundant and vibrant, what they lack are good defenses — no spines, no toxins. Indeed, they are the perfect morsel for other fish-eating fish, and they know it. The moment a predator is detected, they'll dart for cover, their speed and agility their only hope of survival. As perpetual menu items, damselfish have developed multiple mechanisms for detecting danger. They can even "smell" danger — when damselfish's skin is injured, certain chemical compounds leech into the surrounding water. Other damsels can sense these chemicals — essentially "smelling" them — and when a damselfish catches a whiff of Eau de Injury, it runs and hides. But while these chemical alarms seem to benefit fellow damselfish, scientists have long debated whether the injured fish has anything to gain from sending out chemical cues. Are the compounds simply a byproduct of the physical damage? Or do they serve some greater purpose to the fish under attack? Now, an international team of scientists have published the first evidence of an individual fish benefitting from releasing these chemical alarm cues in a new paper in Proceedings of the Royal Society B. The pair first wondered if the chemical alarm released when a damselfish is injured had effects on other species — specifically, predators. So, they cut lemon damselfish in a small amount of seawater, then used a syringe to inject that seawater in the field on a reef to see who showed up. Dusky dottybacks flocked to the site within 5 minutes when injured-fish water was released, but didn't come to seawater controls. "This is the first study, to the best of our knowledge, to provide direct empirical evidence that a marine predator is attracted to and aggregates around prey chemical alarm cues under natural conditions," the authors explain in their conclusions. Next, the scientists created a lab experiment to test if the arrival of those secondary predators was of any use to a damsel in distress. They created tank set-ups where there was a) only one predator, b) two predators, or c) two predators, but the first one didn't know the second was there initially because of a current. They found that when the main predator knew there was a competitor in the arena, it became more aggressive towards the potential meal. But most importantly, whenever there was a secondary predator — even if the main predator didn't know it at first — the damsel was significantly more likely to escape.

The team's experimental setup to test whether the chemical cue benefitted the damselfish. Figure 1 from Lönnstedt & McCormick 2015 "Chemical alarm cues in fish seem to function in a similar way to the distress calls emitted by many birds and mammals following capture," said study co-author Mark McCormick from James Cook University: they rally reinforcements in the form of other predatory fish. "More predators would seem to mean more trouble, but we discovered that additional predators interfere with the initial predation event, thus allowing the prey a greater chance to escape." It's a classic 'the enemy of my enemy is my friend' scenario: when a damselfish is injured, the broken skin emits a chemical cue that is picked up by other predatory fish looking for an easy meal. When an additional predator comes in to grab a bite, the predator that was making the attack is distracted (if not suddenly in danger itself, should some of those predators be larger) and thus the damsel has a brief chance to avoid becoming dinner while the two predators squabble over who gets what. The researchers found in their experimental setup that when there was just one predator in the tank, the damsel was devoured 19 times out of 20. But, should another predator have a chance to get in on the mealtime action, the damsel had a 40% chance of escaping. "These findings are the first to demonstrate an evolutionary mechanism by which fish may benefit from the production and release of chemical alarm cues, and highlight the complex and important role chemical cues play in predator-prey interactions on coral reefs." said Oona Lönnstedt, lead author of the study. In a broader sense, these data further reveal the complex nature of chemical signaling in marine environments. As humans, we're biased by our reliance on vision and we miss so much of what really goes on underwater. Studies like this one show that there's so much more happening beneath the waves than we've ever accounted for. Citation: Lönnstedt OM and McCormick MI (2015) Damsel in distress: captured damselfish prey emit chemical cues that attract secondary predators and improve escape chances. Proceedings of the Royal Society B, 20152038. DOI: 10.1098/rspb.2015.2038