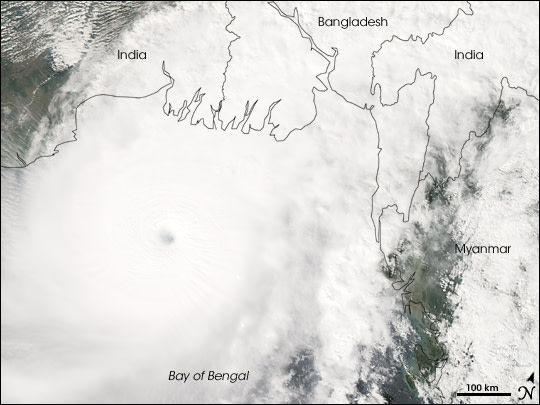 It seems 300 fishing boats and 1000 people are already missing in the storm. However, there's good news, too, according to Jeff Masters: The landfall point is a mangrove forest, not very populous. Still, the whole area has to expect a Katrina like storm surge upwards of 20 feet in some places. To quote Masters:

The coast in western Bangladesh has the Sundarbans Forest, the world's largest forest of mangrove trees. This region is the least populated coastal area in the country, and has been part of a major reforestation effort in recent years. The portion of coast likely to receive the highest storm surge levels of 20-25 feet is virtually unpopulated. However, storm surge levels of 10-20 feet are still likely to affect areas with a population of at least a million, to the east of the Sundarbans forest, and inland from the forest. The last major cyclone to hit western Bangladesh occurred in November 1988. This Category 3 cyclone with 125 mph winds had a 5-10 foot storm surge, and killed 2,000 people.

We can only wait and see...but it sounds like at least in terms of its specific landfall location, this was not a worst case storm--which is at least some relief.