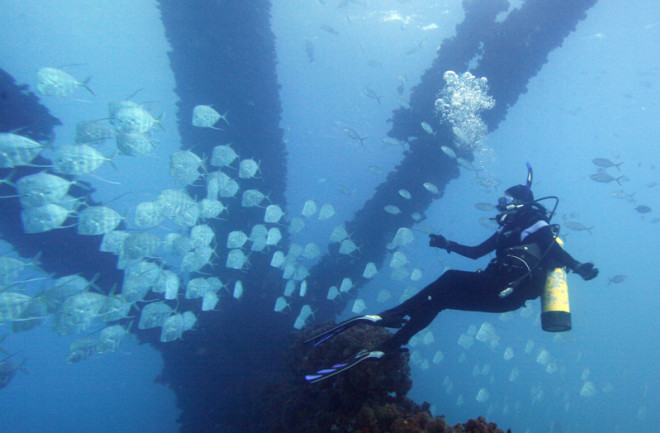 Certain fish species, such as the lookdown (Selene vomer), can alter the way light reflects off them to hide from predators.  | Erich Schelgel

It’s not easy to hide if you live in the open ocean. To avoid predators, some fish sport pale bellies and dark backs to blend in with the sky and the deep. Others are transparent. But evolutionary biologists at the University of Texas have discovered a true undersea camouflage expert: a fish that manipulates polarized light.

Humans generally can’t perceive light polarization, the parallel alignment of light waves, but many fish can. So can their predators. Curious if prey species have evolved ways to exploit that ability, the researchers caught some lookdowns — a silvery game fish often found in public aquariums — in the Gulf of Mexico. Placing the fish in a tank, they shined artificial sunlight onto the water at different angles to represent the light at various times of day.

When conditions mimicked high noon, the lookdowns reflected the light directly, like a mirror, to confuse predators. But at simulated dawn and dusk, when the light wasn’t right overhead, that strategy didn’t work so well. Researchers found that at these times of day, when the light was polarized, the lookdown could manipulate its skin to change how light bounced off it, decreasing the fish’s contrast with its surroundings and making it harder for predators to spot.

Whether lookdowns use this reflective trick deliberately isn’t yet clear, but the finding overturns decades of conventional wisdom that argued simple mirroring was the ideal way to hide underwater. Mimicking this mechanism, scientists — and the military — may one day learn how to make objects seemingly vanish in plain sight.

[This article originally appeared in print as "Cunning Fish Camo."]