Cuckoos are some of nature's most familiar conmen. Several species of this large family are murderous slackers, who shun their own parental responsibilities by deceiving other birds into caring for their chicks. In the process, they destroy the eggs of the unwitting adopted family to ensure that their own chick gets undivided attention. But this is not the only way that cuckoos fool other birds - they also mimic hawks. 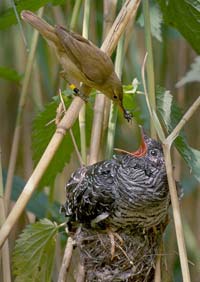 The resemblance between cuckoos and hawks (particularly sparrowhawks) has been noted for millennia. Both birds have long bodies, wings and tails and their paler, striped undersides contrast against a darker grey or brown backs. The resemblance is uncanny enough that Pliny believed that cuckoos disappeared from Europe in the winter by transforming themselves into hawks, a theory that Aristotle rightly dismissed on the grounds that cuckoos lacked the formidable talons and curved beak of hawks.

Hawks and cuckoos belong to two very different families of birds, so why do they look so similar? Non-parasitic cuckoos (and indeed, not all cuckoos leech off the parenting skills of other birds) provide an important clue, for they look much less than hawks than parasitic species. There are two possible explanations for this similarity.

The first is that both groups have independently evolved the same physical traits for the same reasons - a process called convergent evolution. Neither bird wants to be seen by potential prey or hosts. As they perch in twigs and branches, having a darker back makes them harder to spot, and bars on the underside help to break up their outline. Their body shape helps them to make a controlled glide, which sparrowhawks use to launch surprise attacks, and cuckoos use to sneak up on a targeted nest.

Alternatively, the cuckoos could be actively mimicking the hawks. The disguise could fool the cuckoos' predators. That's useful for them as they aren't particularly powerful or agile birds and they spend a lot of time on exposed perches, keeping an eye on the nests of potential victims. They could also fool potential parents. The host birds either run away, which gives the cuckoo free passage into their nests, or they mob the supposed predator en masse, which gives away the location of their precious nests. So which theory is right? 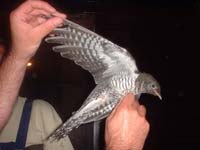 Nick Davies and Justin Welbergen from the University of Cambridge decided to find out by comparing the way small birds respond to stuffed hawks and cuckoos. Species that are parasitized by cuckoos often evolve defences including the ability to distinguish cuckoo eggs from their own. These frequent victims may also be able to pierce the adults' hawk-like disguises, so Davies and Welbergen decided to test two birds - great tits and blue tits ­- that are not victimised by cuckoos, but are attacked by sparrowhawks.

They set up peanut feeders at three sites around Cambridge that are frequented by great tits, blue tits and sparrowhawks alike. Near the feeders, Davies and Welbergen set up stuffed mounts of either sparrowhawks, cuckoos and (as a harmless control) collared doves. And to rule out the possibility that the tits could choose to avoid cuckoos simply because they had never seen them before, the duo also tested their responses to teals, a type of small duck that does not use tit feeders.

They found that over a five-minute period, far more tits visited the feeders when there were teals or doves nearby than when cuckoos or hawks were present. In the presence of teals, many tits arrived at the feeders and stayed for a minute on average.

But they were equally alarmed at the presence of both hawks and cuckoos, giving out alarm calls and retreating to perches several metres away with a high vantage point. Not a single tit approached feeders watched by stuffed hawks and just one individual turned up when cuckoos were used, but fled within 30 seconds. After seeing either hawks or cuckoos, the tits were also more reticent to approach the feeders in subsequent trials when the potential threats were removed.

Davies and Welbergen found that its barred underside is a critical element to the cuckoo's disguise. They pinned pieces of white silk over the undersides of their hawks, cuckoos and doves. Some of these were left untouched and others had black bars drawn onto them with a felt-tip pen. They found that tits always stayed clear of the hawks, bars or no bars, but barred doves or cuckoos were significantly more likely to deter them from the feeders than unbarred versions.

These results don't rule out convergent evolution as an explanation or the similarities between cuckoos and hawks. But they do show that mimicry has undoubtedly driven cuckoo evolution, as some small birds clearly mistake cuckoos for hawks.

The reactions may seem surprising for a closer inspection would surely reveal a cuckoo's lack of talons or a hooked beak. But Davies argues that small birds can ill-afford the time to leisurely scrutinise a potential threat. So high is the cost of delaying, that the mimicking cuckoos can get away with a half-hearted resemblance to their hawk models.

But not all species are so easily deceived. Davies and Welbergen have another paper in print, which shows that reed warblers, a favourite host of cuckoos, have learned to tell the difference. When they see stuffed hawks, they beat a hasty retreat, but they'll violently attack stuffed cuckoos. The ability to see through the mimicry of the adults is yet another strategy that cuckoo victims use to protect their own young.

Images by S.Seyfert, Per Olsen