Crows Can Build Tools From Memory 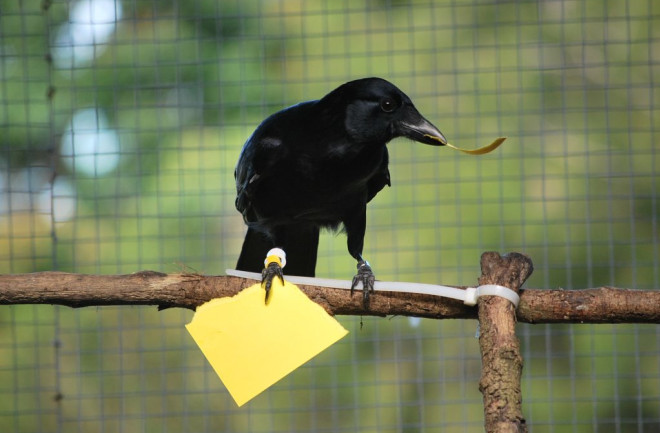 (Credit: Sarah Jelbert) There’s no denying crows are smart. They can remember where food has been hidden, recognize faces and craft tools. And, according to a new paper in Scientific Reports, some crows can even make those tools from memory. This skill may point to these clever corvids having a sort of culture of their own.

Researchers, led by Sarah Jelbert at the University of Cambridge, worked specifically with New Caledonian crows. These birds, native to the islands of New Caledonia east of Australia, are known for their ability to craft tools. But experts haven’t been able to pin down where the crows pick up their skills. A bird in one area can construct the same tool as another bird miles away — but there’s no evidence bird one watched bird two build the gadget in order to copy it. And New Caledonian crows don’t really have a language, either. So if they’re not building by imitation or cawing out instructions, how is this knowledge getting passed around? Jelbert and her team had a hunch it was because the birds were building based off the memory of tools they’d seen. To test this, the group trained eight crows to place pieces of paper into a pseudo-vending machine (really just a wooden box) to get a treat. However, the crows only got treats when they popped in a paper “coin” of a certain size. Once they learned which sizes garnered a reward, Jelbert and her team then gave the feathered participants large cards; the birds could fashion these into the coin sizes they’d picked up on earlier. Importantly, the crows didn’t get any sort of template when they were working with the big cards. And lo-and-behold, the birds snipped them into pieces that were similar in size to the coins they’d learned would get them treats.

Given the lack of a template to copy, it seems the crows were able to construct mental images of the coins and use it to replicate a tool. Seeing this in action is important, because, according to the authors, it supports the idea that New Caledonian crows are likely capable of building a culture — at least when it comes to crafting tools. These birds can see something and not just build it from memory, but potentially make improvements in their designs. “Most importantly,” the authors say in the study, “an improvement made by a crow during its lifetime could become part of the template learnt by subsequent generations, leading to an increase in tool complexity over time.” And this progression is a key component of cultural progression. It's similar, the authors say, to how other species of birds pick up on and alter songs over time — a skill that also requires elements of memorization and improvization. Jelbert and her team recognize there’s still work to be done to see if their hypothesis is solid, like testing how long the crows can remember their mental images of the tools. Still, the idea that these creatures hold onto, and more importantly, build on, information in this way only makes them more exciting targets for future research.