Of all the adjectives you could use to describe a crocodile’s face, “sensitive” might not be an obvious one. But their huge jaws, pointed teeth and armoured scales belie a surprising secret. Their faces, and possibly their entire bodies, are covered with tiny bumps that are far more sensitive than our own fingertips. The bumps are obvious if you look carefully. Each one is a small dome, barely a millimetre wide, surrounded by a groove. There are around 4,000 of them on an alligator’s jaws and inside its mouth. Crocodiles and gharials also have the bumps on virtually every scale of their bodies, giving a total of around 9,000. (All of these animals are called crocodilians.) They were first described in 1895, and scientists have used them to identify different farmed species of crocodilians from endangered poached ones. But no one knew what the bumps did. Perhaps they secrete waterproofing oils? Maybe they help the croc to detect changes in saltiness, electricity, magnetic fields, or water pressure? There were plenty of hypotheses, but few actual studies. In 2002, Daphne Soares from the University of Maryland showed that American alligators could orient themselves to the ripples created by a single drop of water, even in complete darkness. The bumps on their faces seems to be involved. It was a brief study, but it intrigued Duncan Leitch from Vanderbilt University, who wanted to know what the bump were doing. Now, with Ken Catania, he has shown that they’re touch sensors, which make a crocodilian’s face exquisitely sensitive despite its hard unyielding armour. Leitch analysed the bumps, which he calls “integumentary sensory organs” or ISOs, on 18 young American alligators and 4 Nile crocodiles. When he cut away the domes, he uncovered a vast network of nerve endings. They’re all branches of the big trigeminal nerve that carries sensations from the animal’s face to its brain. This splits into three main branches – one going over the croc’s eye, one running through each jaw. They branch and branch again, finally passing through holes in the animals’ skulls to reach into the ISOs themselves. 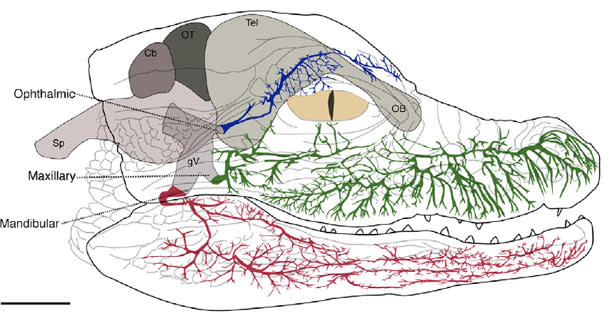 What type of sensation are these nerve endings conveying? Leitch ruled out a few possibilities. He dipped the animals’ legs in varying degrees of saltwater, and found that the nerves in their ISOs didn't react. He put a 9-volt battery in the water to create electric fields. Nothing. Instead, Leitch found that the nerves feeding into the ISOs end in a variety of touch sensors. Some finish in the topmost layers of skin, which is exceptionally thin over the bumps and can compress at the slightest force. Others end in structures called lamellar corpuscles, which are sensitive to vibrations, or Merkel discs, which detect pressure. The ISOs are extraordinarily sensitive. Leitch recorded the activity of their nerves using electrodes, and stimulated them with von Frey hairs – nylon filaments that can be pressed against a piece of skin with a precise amount of force. He found that the most sensitive ISOs can sense forces as tiny as 78 millionths of a Newton—that’s ten times more sensitive than the most sensitive parts of our fingertips. If you compress the bumps by just 4 millionths of a metre, the nerves within them would fire. To see this sense in action, Leitch dropped pellets of food into his crocodilians’ tanks, and filmed them in pitch-blackness using infrared cameras. They would rapidly turn towards the ripples and sweep their heads from side to side. Once their skin touched the food, they snapped it up within 50-70 milliseconds. They would also wait submerged until a fish swam past their open jaws. Again, as soon as the prey made contact, the croc snapped shut. Leitch and Catania think that the ISOs help crocodilians to capture their prey by either sensing ripples in the water, or feeling the direct touch of food. They probably also use the sensors to distinguish between different objects in their jaws, which is why the bumps are most concentrated around their teeth. Mother crocs will often carry their eggs and babies in their jaws, so their finely-tuned sense of touch may help them to distinguish between prey (Bite!) and their own young (Don’t bite!). But why are they all over a crocodile’s body and only on an alligator’s face? “This is a big mystery,” says Leitch. He saw no differences between the ISOs on different parts of his crocodiles. Some people have speculated that the alligators have body ISOs buried deeper in their skin, but Leitch saw no evidence of this. “Another possible idea is that the ancestors to modern crocodilians had them all over the body and head, but over time, the body ISOs might have been lost in the alligator lineage,” he says. “It definitely is still a puzzle.” Reference: Leitch & Catania. 2012. Structure, innervation and response properties of integumentary sensory organs in crocodilians. J Exp Biol http://dx.doi.org/10.1242/jeb.076836