Humans typically feel uneasy when they see a very realistic human-looking robot or computer avatar, a phenomenon called the "uncanny valley" response. According to a new study performed with monkeys, that reaction might have an evolutionary basis. Researchers hypothesize that the response stems from almost realistic images that signal HUMAN! to us, but then fail to live up to the initial excitement. The uncanny valley response has been documented in humans since the 1970s, and has been blamed for the unpopularity of some CGI films with realistic characters

, and it is touted as the reason Pixar stuck to characters with cartoonish features [New Scientist]. 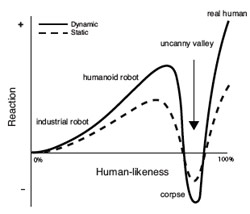 To test their preference, researchers showed macaque monkeys real pictures, digital caricatures and realistic reconstructions of other monkey faces. To the latter, the macaques repeatedly averted their eyes [Wired.com], suggesting that monkeys also fall into the uncanny valley.

However the researchers couldn't determine for certain whether the monkeys were repulsed by the almost real faces, or were simply more attracted or interested in the others. The best way to do that would be to repeat these experiments while looking for possible signs of unease--