Crayfish females lure males with urine, but then play hard to get 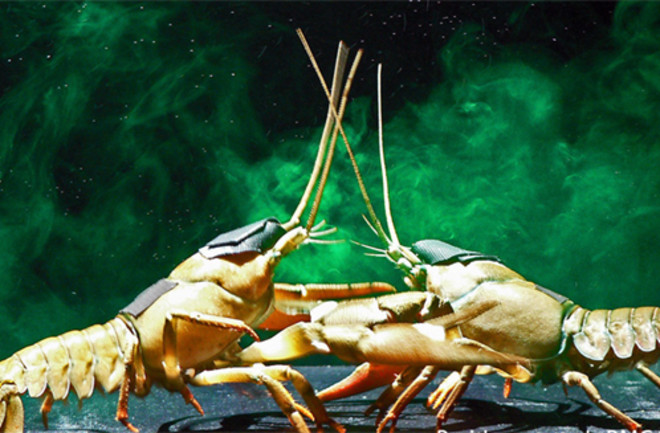 Releasing a steady stream of urine to attract a mate and then fighting off anyone who still dares to approach you doesn’t seem like a great idea for getting sex. But this bizarre strategy is all part of the mating ritual of the signal crayfish. A female’s urine, strange as it sounds, is a powerful aphrodisiac to a male.

Fiona Berry and Thomas Breithaupt studied these courtship chemicals by organising blind speed-dates between male and female crayfish, whose eyes had been covered with tape. They also injected a fluorescent dye into the animals’ bodies, which accumulated in their bladders. Every time they urinated, a plume of green dispersed through the water.

If the duo blocked the female’s nephropores (her urine-producing glands), the males never showed her any interest. If they met, they did so aggressively. But when the duo injected female urine into the water, things took a more lustful turn, and the males quickly seized the females in an amorous grip. Female urine is clearly a turn-on for males.

But the female doesn’t want just any male – she’s after the best, and she makes her suitors prove their mettle by besting her in a test of strength. As he draws near, she responds aggressively, even though it was her who attracted him in the first place. No quarter is given in these fights. The female only stops resisting if the male can flip her over so that he can deposit his sperm on her underside.

Female crayfish shoulder all the burden of raising the next generation, spending six long months rearing their offspring alone. Males, however, only contribute their sperm. Because the females make such a big investment in the next generation, it’s in their interest to choose the best partners.

Being nocturnal, they can’t see how strong a male is and chemical cues aren’t always reliable indicators of quality. The simplest way of discerning the strongest males is to test their strength for herself. By playing hard to get, she makes sure that she gets fertilised by the best mates, who will at least help to produce the fittest possible young even if they never help to raise them.

Urine typically has an aggressive meaning for crayfish. Males release it when they battle each other, and so do females. During courtship, the difference is that males are drawn to female urine and they stop releasing their own.Doing so might be their way of appeasing the violent female, his way of raising a chemical white flag in the hopes of getting a chance to mate.

In some ways, this is a surprising set-up. In species like crayfish, where females do all the work in raising the next generation, males usually have to be the persuasive ones during courtship while females are the choosy sex. But female crayfish have taken on both roles – seductress and selector. By sending out mixed messages with her urine, she can draw a pool of eager mates that she can then test.