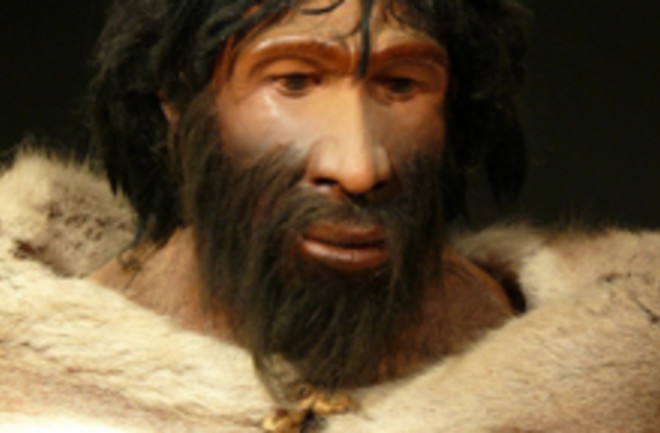 Over the past few years, several studies have illuminated some of what happened during the brief period when modern humans and Neanderthals overlapped in Europe, with genetic analyses showing that the two groups interbred tens of thousands of years ago (though not frequently) and ancient remains suggesting that modern humans fought and---more controversially---ate their prominent-browed contemporaries. It seems that humans and Neanderthals made occasional love and intermittent war, but what were those interludes of interaction actually like? What was going on inside those distinctive crania? It's a tricky question to answer---behavior doesn't fossilize---but anthropologist Thomas Wynn and psychologist Frederick L. Coolidge combine genetic and anthropological evidence with a healthy dose of well-informed speculation to offer an intriguing picture of how Neanderthals may have lived, thought, felt, and acted. Wynn & Coolidge have a new book out on the subject, and they share a condensed version of their theory at New Scientist, offering answers to such questions as whether Neanderthals had a sense of humor (slapstick yes, subtleties no) and how their cognitive abilities compared to ours (less creativity and short-term memory, more learning by observation). And as for whether those bellicose and amorous interspecies overtures had to be conducted in pantomime, the researchers point to evidence suggesting that Neanderthals could speak---though if we could understand them, or they us, remains a mystery. Overall, the portrait they paint of Neanderthals is an impressive, if not always flattering, one:

Jo or Joe Neanderthal would have been pragmatic, capable of leaving group members behind if necessary, and stoical, to deal with frequent injuries and lengthy convalescence. He or she had to be risk tolerant for hunting large beasts close up; they needed sympathy and empathy in their care of the injured and dead; and yet were neophobic, dogmatic and xenophobic.