Cracking a Very Cold Case: the Killing of Ötzi the Iceman

A new study of some old pictures reveal what he ate, and perhaps how he died. 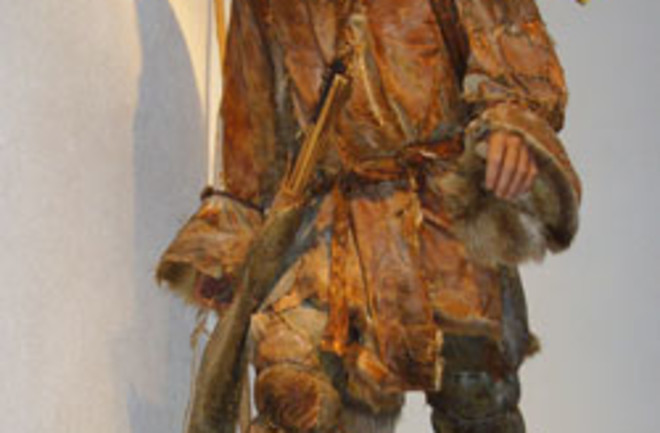 Reconstruction of how Ötzi may have looked when alive (Museum Bélesta, Ariège, France). | Wikimedia Commons

Twenty years after hikers stumbled upon Ötzi the Iceman’s 5,300-year-old body poking out of a glacier in the Tyrolean Alps in Italy, researchers have finally located the legendary mummy’s stomach. Retired Italian radiologist Paul Gostner was reexamining body scans of Ötzi taken in 2001 and 2005 when he noticed a previously unidentified organ near the mummy’s intestine. Gostner realized it was the Iceman’s stomach, shriveled beyond recognition after thousands of years on ice, and transposed with the colon, probably as a result of the body’s having lain prone over a rock for so long.

Ötzi is the only ancient mummy ever found in the Alps, and his remarkably preserved body provides important insight into health and culture in the European Copper Age. He is also the subject of an international murder investigation. Aided by Gostner’s find, paleopathologist Albert Zink of the Institute for Mummies and the Iceman at the European Academy of Bolzano, Italy, located remnants in Ötzi’s stomach that genetic tests revealed to be goat meat and grains—evidence that overturns the dominant theory that Ötzi died hungry and hunted. “He was not in a rush or fleeing from enemies,” Zink says. The Iceman, whose left shoulder was punctured by an arrow, was more likely the victim of an ambush soon after his last meal.

1991: Hikers discover Ötzi’s corpse with intact clothing and gear in a melting glacier.

2002: X-rays reveal an arrow in his left shoulder. Was he fleeing a fight?

2003: New find: A deep wound on Ötzi’s hand was healing when he died. He was stabbed shortly before the arrow hit.

2011: Another look reveals a full stomach; Ötzi was not fleeing before he died.