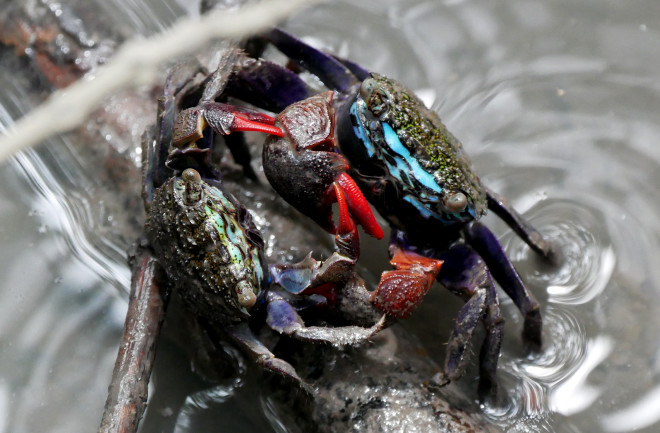 After a win, mangrove crabs (Perisesarma eumolpe) will gloat to keep opponents from going for round two. Photo Credit: Marut Sayannikroth/Shutterstock From touchdown dances to victory laps, we all love to bask in the glory after a big win. So do mangrove crabs. After a fierce physical altercation, victorious male crabs sometimes stridulate, planting one claw into the ground and rubbing it vigorously with the other to both visibly and audibly revel in their triumph. But the purpose of this gloating was unclear, as little research has examined the consequences of such victory displays. Now, a new paper in Ethology may have an explanation: rejoicing discourages the losing crabs from attempting a rematch. Battles pretty much always involve lots of communication. That's because fights can be extremely costly. Duels can be to the death. And even in species where battles have lower stakes, injuries are still a concern, and the physical costs associated with fighting can be expensive. So many species try to signal their superiority, using ostentatious ornaments like antlers and horns, or through behaviors that highlight size or dominance. But sometimes, a fight is inevitable. If the tussle isn't lethal, then there's an opportunity for continued communication post-contest. And it's becoming increasingly apparent that fight-related signals don't end when a winner is declared. Victory displays are likely common in groups like birds and amphibians. We don't really know how common, because they're rarely looked for. Why rub it in when you win? One of the prevailing hypothesis is that gloating helps discourage a second fight. Victory displays could either be used as an advertisement, to warn any possible competitors that watched your fight to steer clear, or to browbeat your opponent into submission, to ensure they don't even think about a rematch.

In case the name was confusing: mangrove crabs, in mangroves. Photo Credit: ToBeeLife/Shutterstock Mangrove crabs (Perisesarma eumolpe) are one of the few species where victory displays are well documented. Three years ago, researchers from the National University of Singapore showed that the animals' stridulation after fights was indeed a victory display. They then sought to determine what functions the display may have. In a paper published ahead of print in the journal Ethology, they find evidence that the displays warn losers not to start a second fight. After analyzing 77 fights between 27 staged pairings of male crabs, the authors determined that losers were much less likely to initiate a new fight if the winner stridulated after the first battle. That victory dance looks a little something like this:

The steps of a stridulating mangrove crab. Figure 4 from Boon et al. 2009 For an idea of what that might sound like, listen to this video of hermit crabs: https://youtu.be/uv-TDzZi5Nc?t=43s "The dominance of the winner is never assured, after a fight, whenever there exists a risk that the loser could re-engage," explain the authors. "Our results show that stridulatory victory display in P. eumolpe can reduce the instantaneous hazard rate of losers re-initiating another fight." By 'browbeating' their opponents into submission, the victors reduce the odds that they'll have to expend energy on battling in the future. Though, the crabs often did fight again—because the winners picked fights. "This could either be part of the browbeating strategy to further reinforce dominance, or, due to the fact that the loser has been deterred, the winner was the only potential initiator of subsequent fights," the authors speculated. "Support for either hypothesis would require further research." Given the exhausting effort of the fight, it's likely that the act of stridulating takes a good deal of effort, and thus is an honest signal of fighter quality. But again, it's hard to be sure without more information. And although they didn't study it directly, the authors suggest that such displays may also serve as advertisements to reduce the odds of any other crabs initiating a bout. "It is not unreasonable that victory display in P. eumolpe may also function to influence eavesdroppers." So the next time you see a wide receiver shimmy after a touchdown, think about the mangrove crab. Odds are that gloating is meant to stifle the competition. Luckily for us sports fans, our athletes aren't as easily browbeaten by a vibrating display.

Unless it's a New England Patriot doing the dance. Then, let's be honest y'all: you might as well just let 'em win. #GoPats