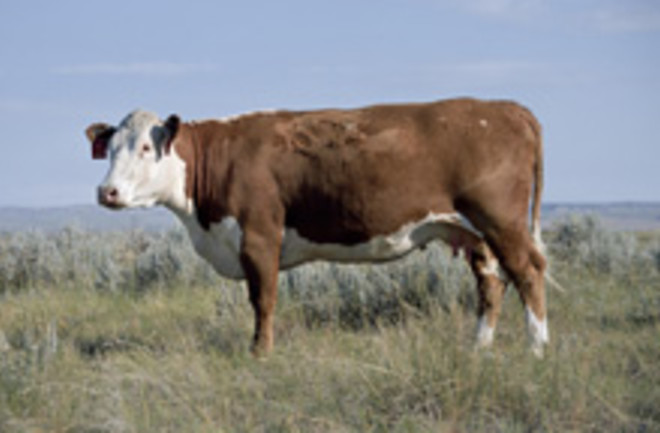 A $53 million effort drawing on the work of over 300 researchers has, after six years, produced something of great value to evolutionary biologists and farmers alike: the complete cow genome, which researchers say holds clues to the cow's evolutionary history, as well as instructions on how to breed better cattle for milk and meat production. One research group sequenced the complete genome of a female Hereford cow, and researchers say that hidden

in her roughly 22,000 genes are hints of how natural selection sculpted the bovine body and personality over the past 60 million years, and how man greatly enhanced the job over the past 10,000 [Washington Post].

Another spinoff research project studied the genetic variants between different breeds, and revealed some of the genetic keys to high-quality milk and beef.

Traits carried by bulls are important in determining how much milk a cow produces. Because bulls don't make milk, however, a bull's "performance profile" has to be sketched by observing the milk production of his daughters -- a process that takes about six years and costs $25,000 to $50,000. Now, male calves can be tested at birth for milk-enhancing traits using gene-chip technology [Washington Post].

Early versions of these gene chips are already in use, ranchers say, but the new information may allow a new level of precision. Researchers also suggested that the genetic information could be used to breed cows that burp up less methane, a greenhouse gas that contributes to global warming. The twostudies were both published in Science. Ronnie Green, who was involved in the study that compared cow breeds, explains that the

cow genome studies weren’t designed to encourage any effort toward genetic modification of cows or their food products.... “That’s not the focus,” Green said. “That’s not to say there won’t be some interest.” The project was intended “to improve productivity and well-being of animals using classic breeding,” he said [Bloomberg].

Evolutionary biologists are also fascinated by the results of the studies, which has provided insight into what makes a cow a cow. They say that

genes governing the immune system, the metabolism of nutrients and social interaction appear to be where much of the evolutionary action has occurred. The result is an animal that lives peacefully in herds and grows large on low-quality food, thanks to the billions of bacteria it carries around [Washington Post].

The cow's hefty immune system prevents it from being sickened by its bacterial load, researchers say. The studies also reveal humanity's influence, showing that selective breeding over the past 10,000 years has reduced the diversity of the species. While the level of diversity is still on par with that found in humans, researchers say the

trend could be amplified as the deciphered genome allows for even more precise breeding. This could be of concern to animal breeders because species with low genetic diversity tend to be more vulnerable to disease and inbreeding [National Geographic News].

Related Content: 80beats: Want Your Genome Sequenced? Got $68,000? Try Your Luck on eBay! 80beats: Coming Soon to a Grocery Near You: Genetically Engineered Meat 80beats: Your Quarter-Pounder Just Might Have Come From a Cloned Cow (Indirectly)Image: Michael MacNeil, USDA-ARS