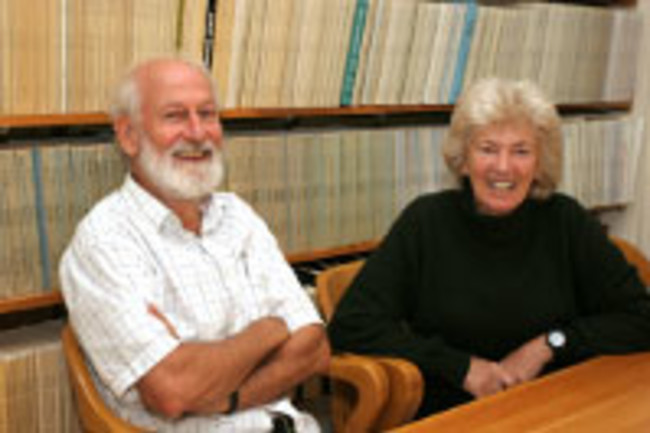 A husband and wife team that for 35 years has researched finches' evolutionary responses to environmental changes have won the prestigious Kyoto Prize in the basic sciences category. Peter and Rosemary Grant, both emeritus professors at Princeton University, have studied finches that lives on the Galapagos Islands for decades and will share the $515,000 prize. The Kyoto Prize is a Japanese award similar to the Nobel Prize.

. Darwin stumbled upon these finches during his famous tour of the Galapagos Islands in 1835, later chronicled in his book The Voyage of the Beagle. The Grants are best known for documenting natural selection in action. Over the course of many years of research in the Galapagos, they demonstrated

Both 72, the Grants have been traveling regularly since 1973 to the Galápagos, the remote islands west of Ecuador. There, they have painstakingly recorded the characteristics of numerous varieties of finches [Philadelphia Inquirer]

how, in just a few short generations, the beak size and shape of ground finches (genus Geospiza) transformed as a consequence of the availability of different sized seeds, which fluctuates with the varying levels of rainfall caused by the El Nino-Southern Oscillation. That study, published in Ecology in 1996, was cited more than 85 times [The Scientist].

Darwin examined the minor differences between the finch species found on different islands in the Galapagos archipelago, and wrote that it appeared that "from an original paucity of birds in this archipelago, one species had been taken and modified for different ends." The Grants built on this basic definition of evolution by showing that changes in weather initiated sharp changes in the types of seeds and other food available.... Birds with different beak sizes were more or less able to eat the food at hand. Those that could eat survived to reproduce - and over the centuries, the natural variations in beaks became some of the characteristics that distinguish one species from another

The couple also authored a book, How and Why Species Multiply: The Radiation of Darwin's Finches, a narration of their experiences while working in the Galapagos. The Kyoto Prize also awards in the categories of arts and philosophy, and advanced technology. All three prizes will be presented in Kyoto this November. Related Content: 80beats: Darwin’s Anti-Slavery Views May Have Guided His Theory of Evolution 80beats: On the Galapagos Islands, an Evolutionary Puzzle That Darwin Missed 80beats: Careful Crossbreeding Could Resurrect Extinct Galapagos Tortoise