Could the color of your bedspread actually attract bedbugs? 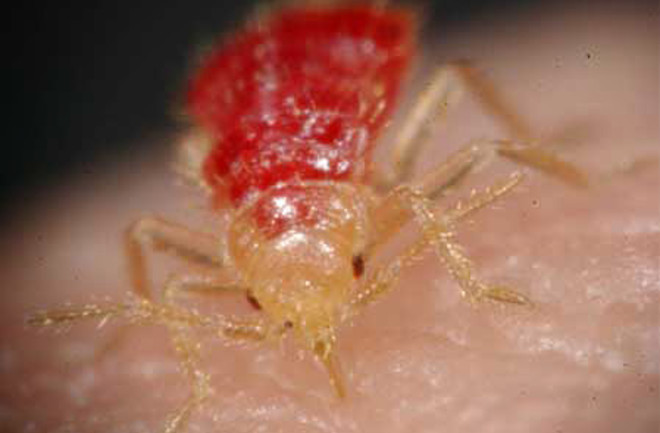 Photo: flickr/liz.novackPlagued by bedbugs? Just want to avoid them in the first place? Well, listen up: apparently, bedbugs have very specific color preferences when it comes time to choosing their hiding places. In this study, the authors put bedbugs in dishes containing tent-like "harborages" of different colors (see figure below -- the tents are actually kind of cute). They then allowed individual bedbugs to choose a tent and recorded which color each one chose. Turns out that the bugs are big fans of red and black, and seem to be least interested in yellow and green. Just something to keep in mind the next time you head out to buy new sheets...Behavioral Responses of Nymph and Adult Cimex lectularius (Hemiptera: Cimicidae) to Colored Harborages "Behavioral bioassays were conducted to determine whether bed bug adults and nymphs prefer specific colored harborages. Two-choice and seven-choice behavioral color assays indicate that red (28.5%) and black (23.4%) harborages are optimal harborage choices for bed bugs. Yellow and green harborages appear to repel bed bugs. Harborage color preferences change according to gender, nutritional status, aggregation, and life stage. Female bed bugs prefer harborages with shorter wavelengths (lilac—14.5% and violet—11.5%) compared to males, whereas males prefer harborages with longer wavelengths (red—37.5% and black—32%) compared with females. The preference for orange and violet harborages is stronger when bed bugs are fed as opposed to when they are starved. Lone bed bugs (30%) prefer to be in black harborages while red harborages appear to be the optimum harborage color for bed bugs in more natural mixed aggregations (35.5%). Bed bug nymphs preferred different colored harborages at each stage of development, which is indicative of their developing eye structures and pigments. First instars showed no significant preference for any colored harborage soon after hatching. However, by the fifth instar, 27.5% of nymphs significantly preferred red and black harborages (which was a similar preference to adult bed bugs). The proportion of oviposited eggs was significantly greater under blue, red, and black harborages compared to other colored harborages tested. The use of visual cues such as specific colors offers great potential for improving bed bug monitoring tools by increasing trap captures." Bonus figure from the full text: