Could NYC Get Katrina-ed in a Warmer, Wetter Future?

Architectural teams are contemplating ways to re-engineer the city to adapt to rising sea levels. 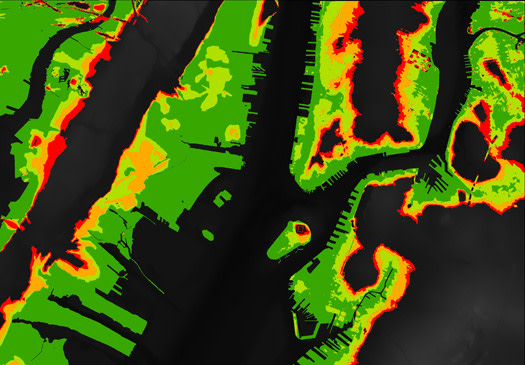 Manhattan has served Hollywood as a stage for alien attacks, giant gorilla invasions, and even the dire effects of global warming (see: The Day After Tomorrow). But scientists worry that unlike building-scaling apes, large storm waves crashing into the city may indeed become a reality in the near future. A recent study (pdf) estimated that at the current rate of global warming, Manhattan will face a sea level rise of 2 feet or more by 2080.

The Museum of Modern Art's current exhibition "Rising Currents: Projects for New York's Waterfront" features ideas on how to stop lower Manhattan and other low-lying parts of New York City from going under when the sea surges during a big storm. Five teams of architects divvied up the city's most flood-prone areas and suggested ecologically friendly ways to protect them.

This map shows the areas of lower Manhattan (top center-right), Brooklyn, and New Jersey that would be swamped if a hurricane hit the region. Areas in dark green would flood during a relatively weak Category 1 storm, with light green, orange, and red designating flood zones for Category 2, 3, and 4 storms (the dark gray, inland areas would not be inundated). 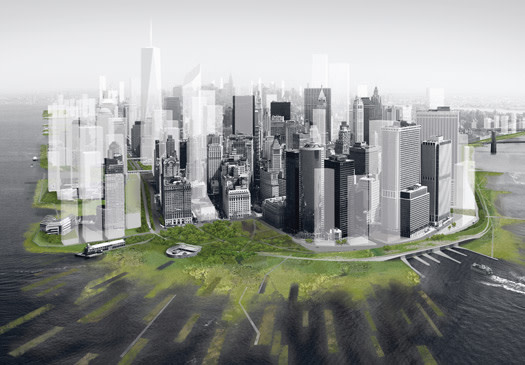 What will happen to lower Manhattan, the world's financial hub, if distant ice caps melt and cause the waterline to rise by six feet? Exploring this scenario, Architecture Research Office and dlandstudio suggest the best way to cope would be to soften the urban edge of lower Manhattan with marshes that would extend out into the Hudson and East rivers.

These wetlands would act as natural sponges, soaking up and diminishing the surging waves. 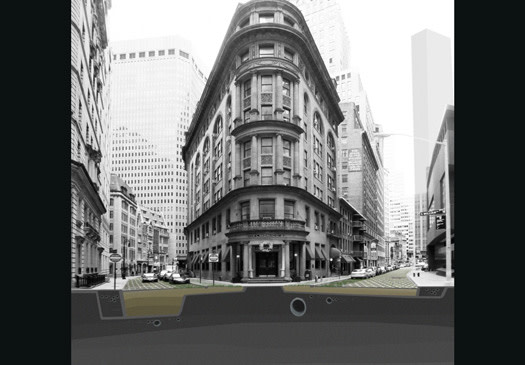 The same architectural team proposes redesigning the city streets in the financial district, replacing impermeable roads with cement lattices that cars can drive over, but that allows grass to grow in the interstices.

In addition to revamping the streets, the architects also suggest overhauling the sewer system in lower Manhattan to carry storm water along the city's permeable lands, where it would be absorbed back into the ground. Combined, these two adjustments would keep runoff water from overwhelming the city's aged sewer system, which today leads to raw waste being flushed into the river during storms. 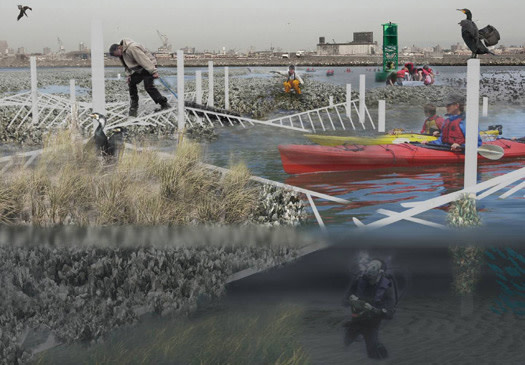 When was the last time anyone associated delicious oysters with New York City's waters? It was well before our lifetime, points out Kate Orff of SCAPE. Yet her team proposes that the mollusks, a staple in the Big Apple until dirty water killed them off, could be brought back as super heroes that could save our boroughs.

The architects propose starting oyster farms in New York's waterways, including Brooklyn's disastrous Gowanus Canal. Over time, the growing colonies would form natural reefs that would soften destructive waves and storm surge. The architects also note that oysters are mini-water purification systems, with each one capable of filtering 30 to 50 gallons of water each day. So the bivalves would help clean New York's polluted waters, and in a decade or two they might even be safe for human consumption. 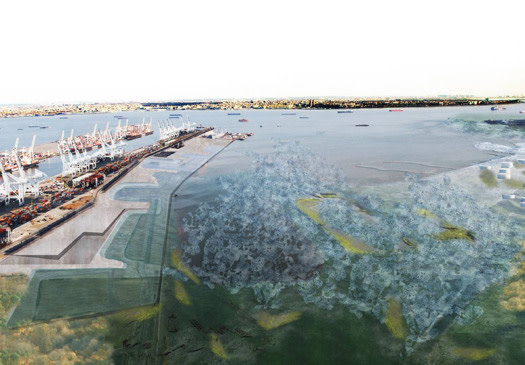 Coral reefs are nature's shock absorbers; they face the full brunt of incoming storms and reduce their violence. So would it be possible to duplicate their functionality with man-made glass reefs? According to architect Mathew Baird, creating these artificial reef barriers would protect the low-lying areas around Staten Island and Bayonne, New Jersey.

The reefs would be fashioned out of glass "jacks" fabricated from recycled glass from the area, earning the project extra environmental kudos. The jacks would be dropped off barges to create the artificial reefs, which would not only slow the waves but would also provide new habitat for marine creatures. "It's a bit of alchemy," said Baird in a recent presentation, "but we hope it's the future." 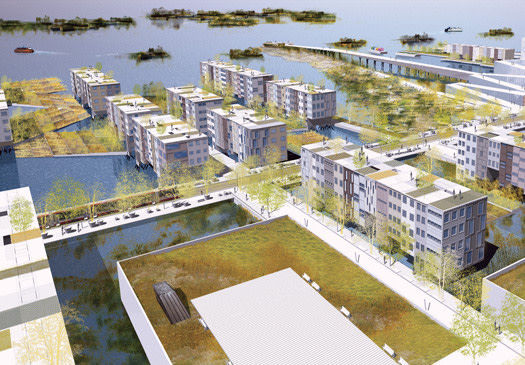 To complement the famous New York City skyline, one team of architects suggests a new "waterline." The bold proposal from nARCHITECTS notes that in order to save neighborhoods at the edge of the water, buildings could be literally be turned upside down and hung from steel armatures, keeping the bottom floors above the waves. This image shows an imagined community in Sunset Park, Brooklyn.

In the team's "New Aqueous City," ground-level parks would be planted with grasses and trees that can withstand occasional flooding, while canals cut into the neighborhood would channel invading waters. According to the architects, the scheme wouldn't just help residents stay above water level, it would also allow for more housing in coastal areas that might otherwise be considered unfit for building. 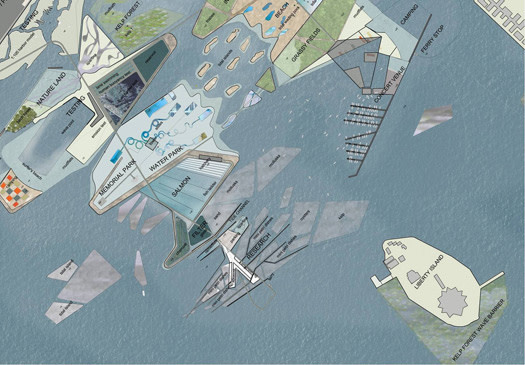 Visitors to the Statue of Liberty at New York Harbor's Liberty Island may have noticed that the site is extraordinarily flat. LTL Architects, the team studying this area, noted that a 2-foot rise in sea levels would begin to flood the island's edges, and an 8-foot rise would result in the entire island going under.

To keep Lady Liberty's hemline dry, the architects propose creating a network of piers, islets, and underwater kelp forests that would surround Liberty Island as well as Ellis Island, and that would act as buffers to keep back storm surges. The new "amphibious landscape" would feature marinas, parks, concert venues and other recreational activities.