Could Modified Proteins Build the Microfactories of the Future? 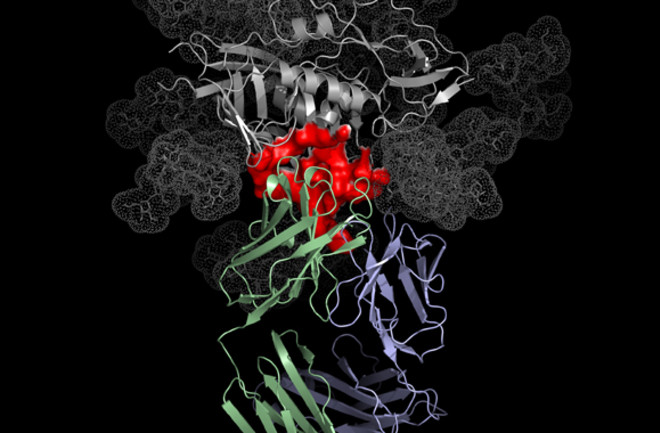 Structural view of a protein binding a virus. (Image: NIH) The central production line of active biomolecules - from DNA to RNA to proteins - is an exquisitely fine-tuned process with a rich evolutionary heritage. From the four-base nucleotide alphabet, three-letter sets, or codons, specify one of 20 amino acids to build the enzymes that make metabolism happen. There is, however, some room to maneuver, and biologists have found an important loophole to hack the system and introduce novel functions or sensing capabilities into different proteins. Building a chain of amino acids requires four key components. Amino acids (1) are attached to their specific corresponding tRNA carrier (2) by a tRNA synthase enzyme (3). Holding onto the amino acid with one hand, tRNAs grope around for specific codon triads on the mRNA (4) with the other, adding their cargo to the nascent protein if all the cogs fit into place.

The fundamentals of peptide synthesis. Peptide chains ultimately fold into functional full proteins. (Image: Wikipedia/ Boumphreyfr) But with 64 possible codons (4 to the third power), and just 20 amino acids, there is room for degeneracy: RNA triads AGU and AGC, for example, both encode the amino acid serine. There are also three codons assigned to a “stop” instruction - UAG, UAA, and UGA - that cut the peptide chain loose and set a new protein on its way. The stop codons are the easiest targets for synthetic biologists. If a new set of tools - a distinct tRNA synthase that attaches a novel amino acid to an imported tRNA - could be inserted and made to recognize one of the stop codons, then the cell could incorporate unnatural amino acids into its proteins. However, the whole process would have to be entirely independent of the canonical cell machinery. If a “normal” amino acid is attached to the new tRNA, if the new amino acid is loaded onto a standard tRNA, or if the added tRNA actually recognizes non-stop codons - these are all problems that would turn the scalpel of unnatural amino acid addition into a dull butter knife. In 2006, scientists at the Scripps Research Institute in La Jolla, California, found a way to make all of these moving parts work together. They used a tRNA and tRNA synthase from the thermophilic methanogen Methanocaldococcus jannaschii to incorporate exotic amino acids into functional proteins of an E. coli culture. With this advance, the floodgates opened, and in the intervening decade, at least 71 unnatural amino acids have been inserted into native proteins. Some of these can serve as nano-scale probes of protein biochemistry: p-azidophenylalanine, for example, absorbs light at a specific wavelength, and this signal is modulated based on local redox conditions. Tracking the absorption under different cell conditions indicates precisely when electron transfer reactions happen. Other unnatural amino acids are fluorescent, providing a much smaller visual marker than typical biomolecules like Gfp, itself a full protein. This feature offers a dynamic view of how proteins move and interact within a cell in real time. Perhaps most remarkably, unnatural amino acids can be inserted into proteins not just to probe their natural activity and dynamics, but to modify their very function. The hottest trend in this emerging field is the incorporation of metal-binding artificial amino acids, which aim to combine the robustness and high activity of enzymes with the reactivity of metals. Earlier this year, a team led by Ivana Drienovska at the University of Groningen in The Netherlands published a report in Chemical Science inserting a metal-binding alanine derivative into an E. coli protein. By co-opting copper’s electron-transferring capabilities into the product, the team was able to construct geometrically specific carbon chains with high energetic efficiency. Ultimately, these functional enhancements to biological systems may open up a new realm of biochemistry, with more efficient, more stable production of useful products. Combining the self-sustaining resilience of biology with the precision of synthetic chemistry, modified living proteins may be the microfactories of the future.