Could Human Altruism Have Evolved Because of War? 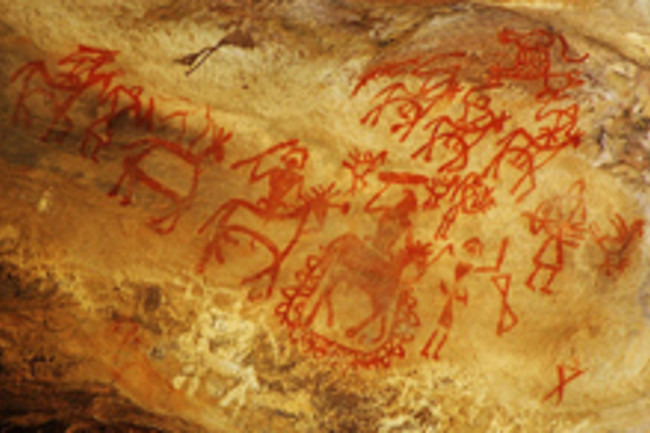 It may sound like a paradox, but a new theory suggests that one of humanity's most noble instincts, altruism, evolved on bloody battlefields in prehistoric times. Evolutionary biologist Samuel Bowles argues that prehistoric culture may have selected for individuals who behaved altruistically towards other individuals in their social groups. The story begins with the

climactic swings that occurred between approximately 10,000 to 150,000 years ago in the late Pleistocene period may have pushed once-isolated bands of hunter-gatherers into more frequent contact with one another.... "I think that's just a recipe for high-level conflict" [New Scientist]

"We're talking about groups of men who got out in twos or threes or fives," he says. "They didn't have a chain of command and it's hard to see how they could force people to fight." For this reason, altruistic intent on the part of each warrior is key. Each person would do better to stay home than to put their life on the line for their neighbours – yet they still went out and risked their lives, Bowles says [New Scientist].

In the study, published in Science, Bowles set out to determine what would have happened to a group of altruistic individuals who had to fight other, more selfish tribes.

According to his analysis of archaeological evidence from Stone Age sites and and ethnographic studies of remaining tribes, combat between groups accounted for about 14 percent of all deaths in hunter-gatherer societies.... After estimating the rate that altruism would reduce an individual’s chances of reproducing, Bowles plugged the numbers into a model of intergroup competition where an individual’s altruism would also improve a group’s chances of combat triumph. Groups with selfless individuals eventually predominated, and altruism predominated within those groups [Wired.com].

Bowles stresses that his study is just a theory, and other experts stress that it's a controversial one. Altruism is assumed to have some genetic root, but Bowles' theory hinges on the idea of

genetic group selection — selection for traits that are passed on because they benefit the group, even at a cost to individuals. Many biologists think this is, in practice, an unworkable process in human groups because they are not genetically distant or differentiated enough from each other for selection of group traits to occur [Nature News].

Related Content: DISCOVER: Has Science Found a Way to End All Wars? DISCOVER: We All Live in Darwin's World shows how evolution can help explain love, politics and the cosmos