Could Bats Save Tequila? 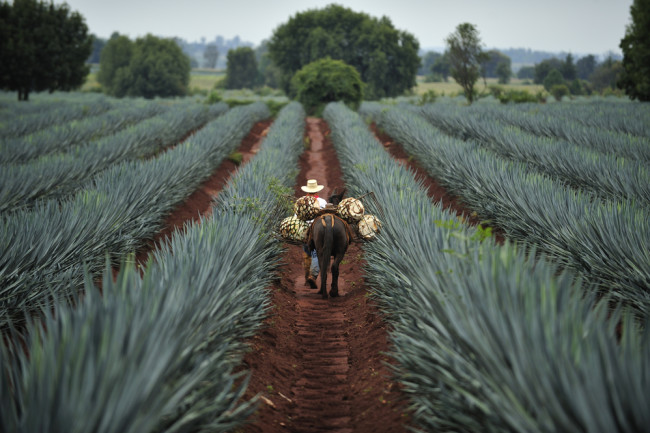 A tequila farmer walks down rows of blue agave planted for harvest. (Credit: T photography/Shutterstock) In the late 1950s, “Tequila,” The Champs’ most famous song, popularized the spirit beyond Mexico. Just a few years later, margaritas, a classic tequila-based cocktail, were all the rage in American bars. The Rolling Stones even showed their love for the liquor, calling their ‘72 tour “The Cocaine and Tequila Sunrise Tour.” In the ‘90s, with the spirit already grounded in pop culture, the tequila industry experienced its first great economic boom and blue agave, the plant from which it’s made, became known as blue gold. Since then, Mexico’s export of tequila has more than doubled. In 2017, approximately eight out of 10 liters were shipped abroad, according to the Tequila Regulatory Council. This high demand, coupled with the industrial process of making tequila on such a large scale, could lead to the end of the blue agave. But one winged critter could prove to be a valuable ally in the fight to save the plant.

Farmers harvest blue agave after about seven years, before it blooms. That’s because sugar levels of the plant’s heart, the part that’s actually harvested and used to make tequila, are highest at this time. Since the agave doesn’t get a chance to flower and reproduce by the usual means, taking shoots from adults and planting them — asexual reproduction — is the only option. Moreover, under Mexican law, blue agave is the only variety of agave permitted for tequila’s production. Those hurdles mean the species now has some of the lowest levels of genetic diversity on the planet. According to Ignacio Torres, a botanist at the National Autonomous University of Mexico (UNAM), "They come from just two or three individuals." And without much genetic diversity, a single pathogen could rapidly wipe out most of an entire crop. That’s just what happened in the late ‘90s. Warmer temperatures and increasing rainfalls in Mexico led to fungus and bacteria striking the valuable plants — around a quarter of the country’s blue agave plants were diseased. “In order to protect the plants, farmers use pesticides and fertilizers in increasing doses,” Torres says. “But this…is counterproductive and creates a vicious cycle.” The more often the farmers use chemicals to protect their crop, the weaker the plants get. And the weaker the plants get, the more chemicals the farmers use.

Bats to the Rescue

Of course, an obvious solution would be to let the plants reproduce sexually. But in reality, it’s much more complicated. Blue agaves’ sexual reproduction could be a short-term loss for farmers. Once the plants flower and are pollinated, fruits and seeds grow — a process that requires the crops to consume all of their resources and die. Still, some farmers and horticulture experts think it’s time to make short-term sacrifices to help ensure the blue agave’s future. Rodrigo Medellín, a biologist and conservationist at UNAM, says bats are a natural pick to help save the plant. The lesser long-nosed bat (Leptonycteris yerbabuenae) is already the blue agave’s primary pollinator. "People usually think of bees,” Medellín says. “Nobody thinks of bats, since they pollinate at night and nobody sees them. They form colonies that can hold up to 200,000 individuals and each one visit hundreds of flowers per night to feed on nectar.” So Medellín has partnered with the Tequila Interchange Project (TIP), a non-profit that encourages sustainable practices in the tequila industry. They’re encouraging tequila producers to let five percent of their crop bloom so that the bats can pollinate them. Just a handful of independent tequila producers have hopped on board so far. Still, since the project began in 2010, TIP members have collected over 1 million seeds, 35 percent of which have germinated, according to Carlos Camarena, owner of, tequila distiller and TIP partner Tequila Tapatío. “Now we are installing a greenhouse to control the initial development of the seedlings,” says Camarena, who’s been involved with TIP since 2015. And soon, Medellín and other UNAM researchers will study the seedlings to determine how much genetic diversity they have. Camarena adds: “Blue agave takes its time. They’ll need around nine years to grow and finally reproduce.” Generation after generation, the genetic variability will increase and lead to healthier plants that are less susceptible to pests and diseases. All thanks to Medellín and his colleagues’ efforts, and of course, those nectar-loving bats.