Could a Supernova Have Led to Humans Becoming Bipedal?

A supernova may have triggered wildfires and led to ecological changes on Earth millions of years ago. 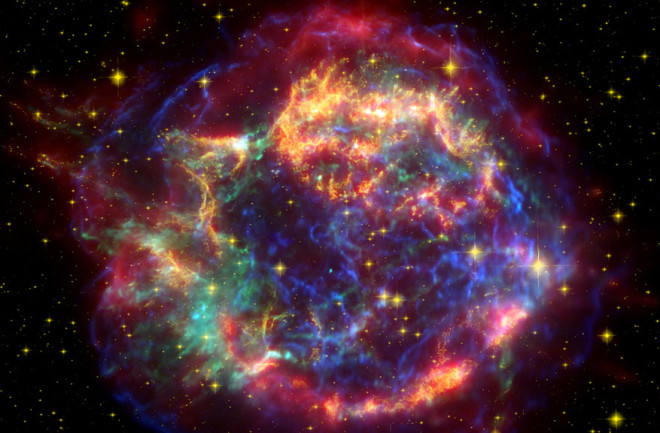 A composite image of the supernova Cassiopeia A. A similar event may have triggered wildfires and led to ecological changes on Earth millions of years ago. (Credit: NASA)

In one fiery burst, an exploding nearby star millions of years ago may have helped change the course of life on Earth.

Upon its death, this supernova sent high-energy charged particles, called cosmic rays, racing across the universe. Now, a new study says those cosmic rays may have led to an uptick in wildfires across the globe by sparking lightning bolts. Those wildfires may in turn have altered our planet’s ecology at a key moment in humanity’s evolutionary history.

Fire From the Sky

The new research, published in May in the Journal of Geology, attempts to tie together cosmic and terrestrial conflagrations to explain a curious uptick in wildfires 7 to 8 million years ago on Earth. By looking at another supernova 2 to 3 million years ago, the researchers say that they’ve found a mechanism by which supernovas could kick off earthly blazes.

There’s some evidence for a supernova 6 to 10 million years ago, which would help explain the wildfire boom then. Those fires turned vast forests into the sprawling grasslands we see in Africa today, something that’s been previously argued to have helped convince humans to become bipedal.

Based on samples of iron-60 — a radioactive form of iron created in supernovas —  taken from the ocean floor, scientists believe one occurred nearby around 2 to 3 million years ago. The study looked into what might have happened after this event, and uses that data to suggest that it or similar supernovas may have led to human ancestors becoming bipedal.

“Right now we have quite strong evidence for a supernova 2 to 3 million years ago,” said Brian Fields, astronomer at the University of Illinois Urbana-Champaign, who was not involved with the new research. “Once you see that data you’re obliged to ask, what are all the effects that such a supernova could have?”

A nearby supernova would have definite consequences for our planet. In addition to shining brightly in our skies for a time, an exploding star nearby would shower Earth with elements like iron, silicon and oxygen as well as high-energy radiation in the form of ultraviolet, x-rays and gamma rays. Cosmic rays, which are actually composed of atomic nuclei and protons, would bombard Earth as well.

When the cosmic rays reach Earth, they ionize and break down particles in the atmosphere. This process has been previously been found to increase the number of muons, a damaging elementary particle that can mutate DNA. But the researchers looked at another consequence of these cosmic ray showers.

In addition to more muons, the cosmic rays would also create a cascade of free electrons, they say, which have previously been shown to initiate lightning.

“The atmosphere down in the bottom mile near the earth is affected [by the cosmic rays],” said Adrian Melott, professor emeritus at the University of Kansas and lead author on the new paper. “That makes it more electrically conductive, so it’s easier for a lightning bolt to get started.”

Although today humans start most wildfires, natural wildfires are almost entirely caused by lightning. An increase in lightning strikes would likely lead to more wildfires worldwide.

The evidence for increased wildfires 2 to 3 million years ago, when scientists are confident a supernova occurred, is still slim. But there may have been an earlier supernova that occurred around the time of an unexplained global wildfire boom.

Samples of carbon and other chemicals in the geological record show an increase in wildfires beginning 6 to 10 million years ago, which likely contributed to an ecological shift from flammable forests to fire-hardy savannas around the world.

In this new environment, some scientists have argued, standing on two legs would confer the ability to better see predators and prey over the tall grasses. The exact cause and timing of human bipedalism is still under debate, though there is some evidence to suggest it may have begun around 7 million years ago.

The new authors suggest that this wildfire increase, which has previously gone unexplained, may be due to a nearby supernova 7 to 8 million years ago. Evidence for a supernova then, however, is still preliminary, though Fields said it may emerge in the future.

“With iron-60 you can’t go back much further than [7 or 8 million years] because it all decays away,” Fields said. “But looking for more exotic stuff like plutonium, there have been hints that, if [they] can be confirmed, would reach much further back in the past.”