Fast-food restaurants like to bedazzle consumers with choice, offering a smorgasbord of different foods and drinks with varying flavours and sizes. And yet, these options have more in common than you might think. According to a new study, this multiplicity of choice hides the fact that the overwhelming majority of American takeaway food is actually based on a single source - corn. It provides food for the animals whose meat makes up the burgers, the oil for frying chips and the syrup that bulks out fizzy drinks. 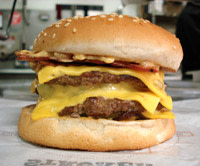 Hope Jahren and Rebecca Kraft from the University of Hawaii discovered the omnipresence of corn by chemically analysing a variety of foods from America's top chains - McDonald's, Burger King and Wendy's. At six cities across the country, the pair bought hamburgers, chicken sandwiches and orders of fries. Returning to their lab, they analysed the levels of different carbon isotopes in each.

Analyses like these have proven to be a surprisingly good way of tracing the origins of foods. Like all plants, corn gets its energy through photosynthesis, but it uses a slightly different method to other important crop plants like rice, wheat or potatoes. This difference is reflected in a plant's ratio of two carbon isotopes - the common carbon-12 and rarer carbon-13. Corn has a signature ratio that sets it apart from other crops and by association, the meat of animals that consume it also stand out in the same telltale way.

Their results revealed that most of the cows and chickens that ended up in the burgers were fed almost exclusively on corn. Out of the 162 samples of beef they collected, only 12 came from animals that were potentially fed on other sources like grass or grains (and interestingly enough, all of these samples came from West Coast branches of Burger King). For chicken, there were no exceptions - they had corn for breakfast, lunch and dinner.

Jahren and Kraft also measured the levels of nitrogen isotopes in both the chicken and beef burgers. The high levels they found indicated that the animals were fed with corn that had been grown using nitrogen-based fertilisers, and that they had been reared in very confined spaces. 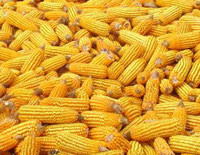 The predominance of corn wasn't just restricted to meat. By subjecting fries to the same isotope analysis, the duo found that Wendy's cooks its fries almost exclusively in corn oil (contrary to the chain's claims), while Burger King and McDonald's use a mix of different oils. And we know that drinks (which weren't included in this study) are sweetened using high-fructose corn syrup. So ubiquitous is corn that out of the 160 items of food bought in Wendy's outlets throughout the country, not a single one could be traced back to a different food source.

The results are interesting in themselves, but why do they matter? You could argue that consumers have a right to know where their food comes from. Fast-food corporations are typically opposed to regulations that require them to report the ingredients in their food, even though they account for over half of American restaurants and despite the immensely calorific nature of their products.

And the fact that so much of said food can be traced back to corn has environmental implications. Corn feed is relatively cheap and provides farmers with a way of maximising the calories that their animals are eating for minimum cost. But corn agriculture in the US is encouraged by heavy government subsidies, but has been criticised for being environmentally unsustainable. It encourages heavy use of both fertiliser (as revealed by the nitrogen isotope analysis) and pesticides.