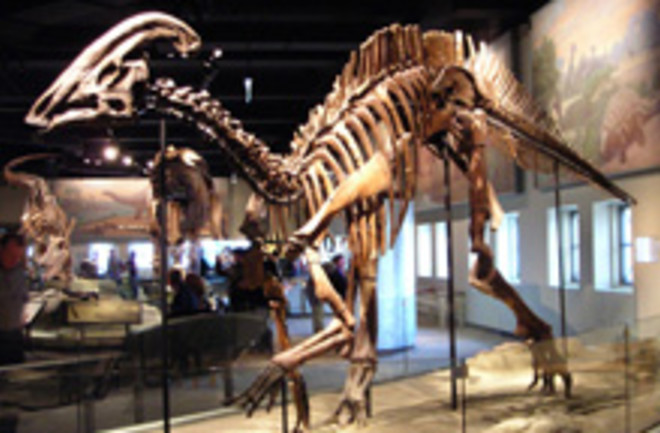 Scientists say they have found fossils near the Colorado-New Mexico border that prove some dinosaurs survived the mass extinction that most researchers believe was caused by a meteor impact 65 million years ago. James Fassett, a scientist with the U.S. Geological Survey, says he has found evidence that a sizable population of ceratopsians and sauropods, a class of giant, dim-witted leaf-eaters such as the brachiosaurus, hung on for another 500,000 years in the [San Juan] basin. "There might even have been some T. rexes, based on some teeth we found" [Los Angeles Times], he said.

The bones of hadrosaurs, tyrannosaurs, anklyosaurs, and several other species were found together in a sandstone formation that dates to the Paleocene epoch—the time period after the so-called Cretaceous-Tertiary (K-T) extinction event, which is thought to have killed off the dinosaurs

[National Geographic News]. To prove that the bones he found were indeed older than the extinction and eliminate the possibility that they had not simply been incorporated into newer rocks, Fassett points to his discovery of 34 bones from a single hadrosaur: If they had been washed away from their original location, they would almost certainly have been separated, not found together [Los Angeles Times

He also investigated the rocks surrounding the bones and studied date indicators, such as their magnetic polarity. He said the evidence "independently indicate[s] that they do indeed post-date the extinction" [LiveScience]. He found that older rocks in the region contained different concentrations of rare metal elements than the dinosaur bones, suggesting that the bones did not originate in those samples of rock. Hassett says there are several possible explanations for how a cluster of dinosaurs could have survived the fallout from the meteor impact, which formed a 112-mile-wide crater on Mexico's Yucatan peninsula. Since the fossils found belonged to egg-laying dinosaurs, the worst effects of the asteroid may have passed by the time unborn eggs hatched, or the survivors of the collision may have been living elsewhere--perhaps far to the north--at the time it occurred. Driven south by the frigid weather unleashed by the asteroid collision, they could have made the San Juan Basin their last home [Los Angeles Times]. The new study, published in Palaeontologia Electronica, is not the first to challenge the theory of mass extinction, which has come under skepticism by some scientists who suspect other factors were involved, from increased volcanic activity to a changing climate [LiveScience], and the recent findings certainly won't settle the controversy for good. "Every few years someone claims to have [found] Paleocene 'surviving' dinosaurs" [National Geographic News], said the Smithsonian Institution's Hans-Dieter Sues. Related Content: 80beats: New Study Casts Doubt on the Asteroid Strike Theory of Dino Extinction 80beats: Forget “The Asteroid”: Could Supervolcanoes Have Killed the Dinosaurs? DISCOVER: Did an Asteroid Really Dust the Dinosaurs?