Parasites come in many forms, including bacteria, viruses, fungi, worms and more. But a very different sort of parasite is infecting dogs around the world. It’s a contagious cancer. CTVT, or canine transmissible veneral tumour, is a cancer that has evolved into an independent global parasite. Most cancers (including those that affect humans) aren’t contagious. Although some infectious diseases can lead to cancer, you cannot actually catch a tumour from someone who has one. But CTVT is an exception – the cancer cells themselves can spread from dog to dog, through sex or close contact. A Russian veterinarian called Mstislav Novinsky first discovered the disease in the 1870s, but it took 130 years for others to discover its true nature. In 2006, Robin Weiss and Claudio Murgia from University College London compared CTVT samples from 40 dogs across the world. All of them carried distinctive genetic markers that set them apart from the cells of their host dogs. They all had a common ancestor – an ancient tumour that escaped from its original host and took the world by storm. CTVT is one of two types of contagious cancer. The other plagues Tasmanian devils and might drive them to extinction. While this second type is confined to Tasmania, CTVT has become a global success story. Hopping across continents on the bodies of dogs, this cancer cell has become an immortal parasite. The ones that Novinski studied in the 1870s were probably largely identical to the ones that Weiss and Murgia looked at 130 years later. But this immortality comes at a price. The contagious cancer sometimes gets a glitch in its power supply, and it has to swap to a new set of batteries. Claire Rebbeck from Imperial College London has found that as the cells spread, they can pick up small structures called mitochondria. These are the batteries that provide our cells with energy, and the tumours can replace their set by raiding their hosts. Mitochondria have their own small genome. Rebbeck looked at these little sets of DNA in 37 CTVT samples from four continents. Like Weiss and Murgia before her, she found that the cancer cells had mitochondrial DNA that was very different to that of their hosts. This shows, once again, that the tumours had spread from dog to dog, rather than rising up independently in each animal. But Rebbeck also found that her mitochondrial sequences were far more diverse than she expected. When she drew a family tree of their evolutionary relationships, she found that the samples fell into two big closely related groups, with three black sheep that sat on their own (see the red boxes below). And when she did the same thing using DNA from the tumours’ main genomes, she got a different pattern. This strongly suggests that the contagious cancers are occasionally picking up mitochondria from their hosts. They have done this many times, ever since the original cancer cell broke free for a life of independence. This probably happened around 10,000 years ago, although the ancestor of today’s tumours probably arose just 250 to 2,500 years old. That still makes CTVT the oldest lineage of mammal cells still around. Why do the cancer cells need new mitochondria? Rebbeck thinks that they burn a lot of energy, and their DNA has a habit of changing quickly. Many of these changes will be harmful. If the cancer cells were confined to the same place, the weaker ones would eventually be weeded out. But that’s not the case – they can go on the move, taking their increasingly hobbled mitochondria with them. The solution: steal fresh mitochondria from a new host. CTVT is well placed to do this, because it evolved from an immune cell called a histiocyte, which can swallow things around it. This story is about more than just a fascinating contagious cancer. It also reminds us about the importance of mitochondria to animal cells, whether normal or cancerous. Last year, I wrote about a paper by Nick Lane and Bill Martin, two scientists who think that mitochondria were the key to the evolution of complex cells. Mitochondria are the remnants of bacteria that were once engulfed by an ancient cell. That’s why they have their own genome. By forming this partnership, the swallowing cell gained access to unparalleled supplies of energy, turning it from a sleek sportscar into a gas-guzzling monster truck. That, in turn, allowed it to escape the shackles of simplicity by developing more genes and experimenting with more types of genes. Every animal, plant, fungus and alga on the planet rose from the results of this old partnership. And so do contagious cancers. 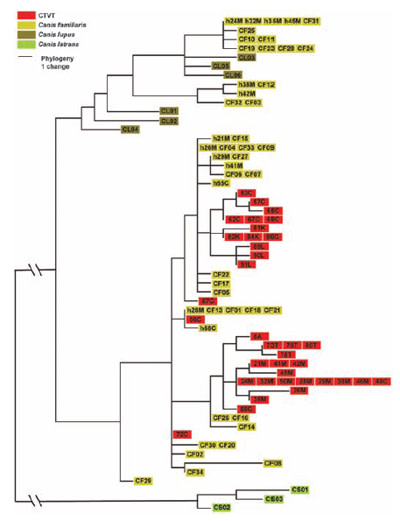