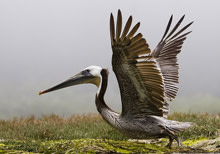 Disoriented and emaciated brown pelicans are turning up in California's suburban backyards and parking lots, far from their coastal habitats, and biologists are struggling to figure out what's wrong with the ailing birds. The pelicans are exhibiting very strange behavior, they say.

A social animal, it is rarely found alone. So it was startling to find one bewildered bird in a Kmart parking lot in Lompoc, another outside a Costco in Goleta and a third on the runway at Los Angeles International Airport. One pelican was found at an elevation of 7,200 feet in the New Mexico snow.... "Normally, they're on piers and places where they can find fish,'' said Rebecca Ryan of the Peninsula Humane Society in San Mateo, which has stabilized several sick birds. "Now they are appearing in really unusual places" [San Jose Mercury News].

Researchers first wondered in the culprit might be neurotoxin domoic acid, which is produced by microscopic algae in the coastal waters; the birds ingest the acid by eating fish that consumed the algae. But researchers say that the pelicans' symptoms don't match the usual pattern seen in a domoic acid outbreak. Domoic acid poisoning usually causes seizures, researchers say, and these birds have had none. The toxin also typically affects marine mammals as well as birds, and no such problems have been reported in sea lions or other mammals. Finally, most

of the hundreds of ailing pelicans are thin, but birds poisoned by domoic acid are typically of good body weight [AP].

Now blood samples have been taken from a handful of the sick pelicans, and lab

tests conducted by University of Southern California revealed Thursday that half of the blood samples from six pelicans showed evidence of domoic acid.... "This is indicative that domoic acid plays at least some role in this event," said David Caron, a professor in USC's department of biological sciences. "There may be some other larger general factors that are at play here, and domoic acid may be one added insult that puts them over the edge" [San Francisco Chronicle].

The birds aren't suffering from lack of food, researchers say, because sardines and anchovies are currently plentiful in the coastal waters. So researchers are investigating other possibilities, like an unknown viral infection or poisoning from some different kind of pollution.

One theory is that the birds may have ingested chemicals from fire retardants used widely by emergency services recently to tackle severe blazes that ravaged the state [BBC News].

The California brown pelican is on the endangered species list, although it has been making a comeback since the 1970s when the pesticide DDT weakened the birds' eggshells and nearly drove the species to extinction.