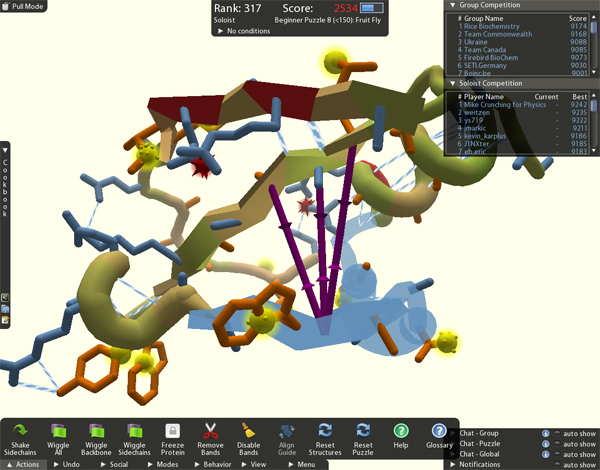 When scientists struggle with a problem for over a decade, few of them think, “I know! I’ll ask computer gamers to help.” That, however, is exactly what Firas Khatib from the University of Washington did. The result: he and his legion of gaming co-authors have cracked a longstanding problem in AIDS research that scientists have puzzled over for years. It took them three weeks. Khatib’s recruits played Foldit, a programme that reframes fiendish scientific challenges as a competitive multiplayer computer game. It taps into the collective problem-solving skills of tens of thousands of people, most of whom have little or no background in science. Here’s what I wrote about Foldit last year:

The goal of the game is to work out the three-dimensional structures of different proteins. Proteins are feats of biological origami; they consist of long chains of amino acids that fold into very specific and complicated shapes. These shapes can reveal how proteins work, but solving them is fiendishly challenging. To do it, scientists typically need to grow crystals of purified protein before bouncing X-rays off them. Foldit takes a different approach, using the collective efforts of causal gamers to do the hard work. And its best players can outperform software designed to do the same job. Best of all, you don’t need a PhD to play Foldit. Barely an eighth of the players work in science, and two-thirds of the top scorers have no biochemistry experience beyond high school. The controls are intuitive; tutorial levels introduce the game’s mechanics; colourful visuals provide hints; and the interface is explained in simple language. While protein scientists concern themselves with “rotating alpha-helices” and “fixing degrees of freedom”, Foldit players simply ‘tweak’, ‘freeze’, ‘wiggle’ and ‘shake’ their on-screen shapes. Foldit’s success relies on the fact that it doesn’t shallowly flirt with interactivity – it’s a true game. Its creator Seth Cooper designed it to “attract the widest possible audience… and encourage prolonged engagement”. It’s competitive: players are scored based on the stability of the structures they end up with and a leader board shows how they rank against other gamers. There’s also a social side: gamers can chat on online forums, work in groups to solve puzzles and share solutions on a wiki. And just like real game development, everything was tuned according to feedback from the players. Tools were added and refined, the difficulty of the tutorials was tweaked to stop frustrated beginners from leaving, and puzzles were matched to the skills of the players. There’s the thrill of contributing to genuine scientific research, but that motivates less than half of the community. The rest do it for the achievement, the social aspects and largely, because the game was fun and immersive. Foldit’s origins lie within Rosetta, a piece of software designed to solve protein structures by simulating and testing thousands of different folds. Rosetta is an example of ‘ distributed computing’, where volunteers run the program on their home computers when they don’t need it. They effectively donate their computing power to speed up the laborious task of solving protein structures. But the volunteers wanted to use their biological computers – their brains – as well as their man-made ones. They suggested an interactive version of the programme and in May 2008, they got their wish with Foldit.

Last year, Cooper showed that Foldit’s gamers were better than the Rosetta programme at solving many protein structures. They used a wide range of strategies, they could pick the best places to begin, and they were better at long-term planning. Human intuition trumped mechanical number-crunching. This year, Khatib wanted to see if the Foldit community could solve fresh problems. He entered the players into a twice-yearly contest called CASP (Critical Assessment of Techniques for Protein Structure Prediction), where structural biologists from all over the world compete to predict the structures of proteins that have almost been solved. They get the best predictions from Rosetta to begin with. Then, they’re on their own. Khatib’s gamers, bearing names such as Foldit Contenders Group and Foldit Void Crushers Group, had varying degrees of success in the contest. In many of the categories, they did reasonably well but they couldn’t match the best groups. They weren’t as good at using the structures of similar proteins to tweak the ones they were working on. They could also head down dead ends if they started at the wrong place. In one case, their strategy of refining their starting structures to the best possible degree led to one of the “most spectacular successes” in the contest. But mostly, they focused too heavily on tweaking already imperfect solutions that other teams achieved better results by making large-scale changes. Learning from that lesson, Khatib stepped in himself. He agitated the initial protein structures in many random ways, to create a wide variety of terrible answers that the gamers could then refine. In their attempts, they came up with the best-ranked answer to the most difficult challenge in the competition. It was a success, and more would follow. After the competition, the players solved an even more important problem. They discovered the structure of a protein belonging to the Mason-Pfizer monkey virus (M-PMV), a close relative of HIV that causes AIDS in monkeys. These viruses create many of their proteins in one big block. They need to be cut apart, and the viruses use a scissor enzyme –a protease – to do that. Many scientists are trying to find drugs that disable the proteases. If they don’t work, the virus is hobbled – it’s like a mechanic that cannot remove any of her tools from their box. To disable M-PMV’s protease, we need to know exactly what it looks like. Like real scissors, the proteases come in two halves that need to lock together in order to work. If we knew where the halves joined together, we could create drugs that prevent them from uniting. But until now, scientists have only been able to discern the structure of the two halves together. They have spent more than ten years trying to solve structure of a single isolated half, without any success. The Foldit players had no such problems. They came up with several answers, one of which was almost close to perfect. In a few days, Khatib had refined their solution to deduce the protein’s final structure, and he has already spotted features that could make attractive targets for new drugs. “This is the first instance that we are aware of in which online gamers solved a longstanding scientific problem,” writes Khatib. “These results indi­cate the potential for integrating video games into the real-world scientific process: the ingenuity of game players is a formidable force that, if properly directed, can be used to solve a wide range of scientific problems.” Update: Stephen Curry, who works on protein structures, had this to say about the paper: “Credit where it's due: this is certainly an innovative approach to the problem of determining crystal structures of proteins. And I do like the idea of 'citizen science'. Although it's probably questionable how much science the gamers are understanding, the involvement in this sort of research, even if it is just at the level of playing a game, is undoubtedly a good thing.” Curry also points out that a structure for this protein was published in 2003 using a different method called nuclear magnetic resonance. Khatib says that this is “quite inaccurate” and that people have struggled to use it to progress any further, but Curry says that they don’t say much about the differences between the old and new structures. Likewise, Khatib doesn’t mention how closely related the M-PMV protease and the HIV ones are. “This information is crucial for deciding whether a structure of M-PMV protease is going to be any use as a template for the design of novel classes of drug targeted to HIV protease. If I had reviewed this paper, I would have asked for that information to be included because it is needed to make sense of observed differences in structure,” he says. Reference: Khatib, DiMaio, Foldit Contenders Group, Foldit Void Crushers Group, Cooper, Kazmierczyk, Gilski, Krzywda, Zabranska, Pichova, Thompson, Popović, Jaskolski & Baker. 2011. Crystal structure of a monomeric retroviral protease solved by protein folding game players. Nature Structural and Molecular Biology http://dx.doi.org/10.1038/nsmb.2119More on Foldit: Foldit – tapping the wisdom of computer gamers to solve tough scientific puzzles