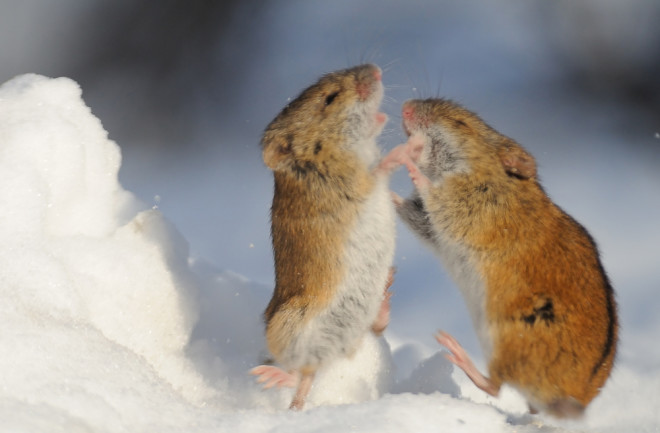 (Credit: Victor Tyakh/shutterstock) Men trying to look good for the ladies might pump iron, but when male mice are regularly exposed to male rivals, it results in thicker penis bones, potentially because wider girth might prove more desirable to females, a new study finds. Though the authors point out it's not applicable to humans. The intense rivalry between males over females has helped drive the evolution of many extraordinary male traits, from peacock plumes to the gigantic antlers of the extinct Irish elk. Evolutionary biologist Gonçalo Igreja André at the University of Western Australia wanted to see if sexual competition might also influence male genitals, reasoning that such research might yield insights on the female orgasm, the evolutionary benefits of which remain hotly debated, he said. The scientists experimented with mice to see whether the mere possibility of competition between males triggered physical changes. Their research focused on the baculum, or penis bone, of the rodents. One group of males were raised alone. Another group were raised along with rival males and their scents. The scientists found that males raised with rivals were generally larger and heavier than ones brought up alone. In addition, males raised with rivals had penis bones that were thicker, while their femurs did not display similar changes. "Our study is the first study to show that the social environment in which mammalian males grow up can have an impact on their genital shape," André said. Prior work found that when a female mouse has sex with a number of males, the shape of a male's genitals can influence the chances of him siring offspring. The big question that remains is how exactly genital shape can grant this competitive edge, André said. One possibility is that male girth might influence the quantity or quality of stimulation that females experience during sex, André said. This stimulation might trigger hormonal responses that have an effect on sperm and embryos, or simply make females more likely to choose a male with enhanced girth over his rivals, he noted. André cautioned readers against extrapolating these results to humans and concluding "that the girth of the penis may influence their fitness or, in other words, that the girth of the penis is important during intercourse." He noted that unlike most mammals, humans do not have a baculum, "so we cannot establish a relation between the girth of the baculum of the house mouse and the girth of the human penis. Even if proven that the baculum has a role on the stimulation the females receive during copulation, we can't establish a connection between house mouse findings and human reproduction." In future experiments, the researchers plan to see how female mice respond to mates with different genital shapes, André noted. The scientists detailed their findings online July 11 in the journal Proceedings of the Royal Society B.