Come For the Beautiful "Glass Gem" Corn; Stay for a Dose of Genetics 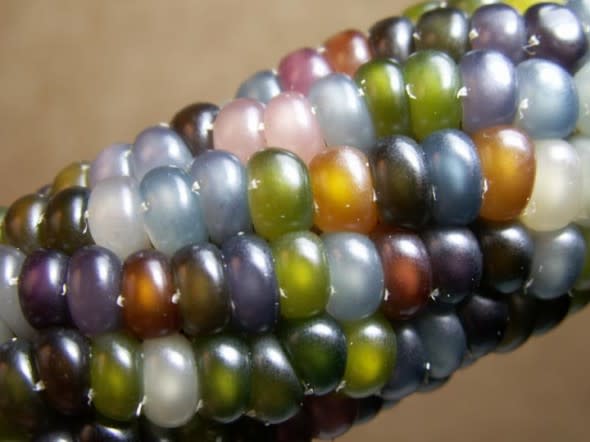 No, this isn't Photoshop or a gemstone-studded trinket---just an ear of corn. Seedsman Greg Schoen of the Seeds Trust

got this "Glass Gems" corn from his "corn-teacher," a part-Cherokee man in his 80s. He planted the seeds, had a gorgeous harvest last fall, and posted the posts on Seeds Trust's Facebook page

in October. Then last week, the photos of the gem-like corn got picked up on the internet and went viral. Good luck trying to get your hands on any seeds now... But kernel color is a fascinating---dare we say, colorful---topic in the annals of genetics research. For one, why are there so many vibrant colors in a single ear of corn? You don't usually see flowers of different colors on a single tree. Each kernel is actually a different corn plant (or the seed of one) with a unique mix of genes inherited from its parents. That's why counting up kernels of different colors in the more familiar purple and yellow corn cobs is a common way of teaching how pigment genes are inherited in Mendelian genetics 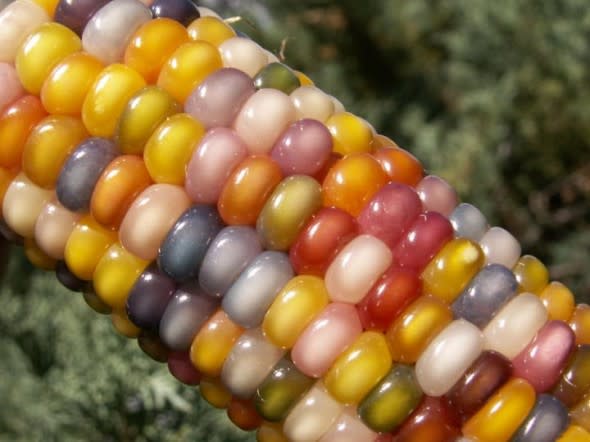 Kernel color has also been used to unravel an odd phenomenon in non-Mendelian inheritance: transposons, or jumping genes. Some types of corn have kernels mottled or streaked

with a second color, which means some of its cells are producing a particular pigment but others are not. Transposons

are stretches of DNA that jump from place to place in the genome, and landing in the middle of a pigment gene would alter the color of that cell. Barbara McClintock won a Nobel Prize

for her discovery of transposons. Even the relatively boring white or yellow corn you find in supermarkets has made big genetic leaps

from grass to the ears of corn we eat today. These gem glass corn, however, might be too pretty to eat. [via Agricultural Biodiversity