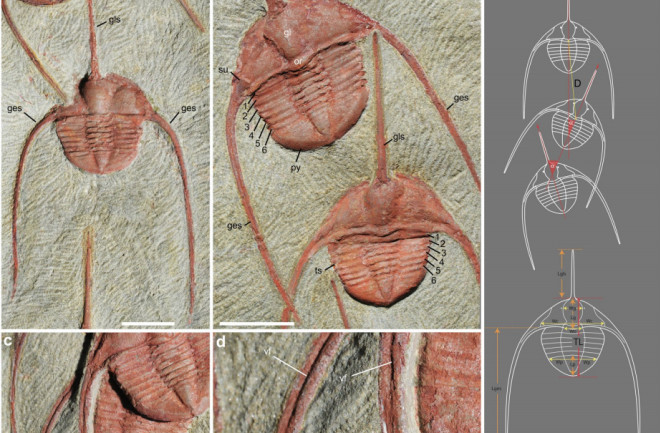 Chains of trilobite fossils unearthed in Morocco suggest that these early arthropods were capable of a collective behavior seen in many of today’s species — only these trilobites had the conga line down about 480 million years ago.

Modern vertebrates and invertebrates alike engage in many forms of collective behavior, such as seasonal mass migrations. But paleontologists have been uncertain about when and why such coordinated action began.

Previous studies of Chinese marine fossils that are about 520 million years old suggested the shrimp-like animals, preserved in a line, were exhibiting a collective behavior. Critics, however, have pointed out inconsistencies in the direction the animals were oriented, and the inconclusive conditions of preservation. It’s more likely, they claim, that the early arthropods were deposited in a jumbled line post-mortem.

Into these murky waters march several chains of trilobites from the Fezouata Shale formation near Zagora, Morocco.

Dozens of individuals of the species Ampyx priscus are preserved in fossilized chains of 3 to 22 trilobites. This particular animal is notable for a short spine projecting forward, essentially from its forehead, and two much longer spines which start at the front of its face (such as it is) and sweep backward along its sides.

It’s these sidesweepers, technically known as librigenal spines, that are of particular interest. That’s because, with the animals arranged in lines, their librigenal spines are typically touching those of the trilobite immediately ahead of or behind them. It’s a major clue that they may have been moving forward across the seafloor collectively, staying together through touch. A.priscus was blind, so it’s reasonable to think that touch played a huge role in how it experienced its world.

While no evidence remains, the researchers note it’s also possible that the animals may have used chemical communication, such as the pheromone trails some caterpillars secrete as they form a line while migrating.

Lining It All Up

Perhaps anticipating raised eyebrows over their conclusions, the authors behind the A. priscus conga line study took great pains to detail how they determined the fossils are the earliest confident evidence of collective behavior.

(Full disclosure: No one is claiming collective behavior started with A. priscus. Finding it so developed in an animal 480 million years ago strongly suggests this kind of coordinated movement originated even earlier, likely during the Cambrian, 485 million-541 million years ago.)

To understand why the trilobites may have been on the move, the team looked to modern animals’ collective behavior, such as that of spiny lobsters living around the Bahamas. The animals move single file during mass migrations to spawning grounds. They also appear to relocate, using a chain-like formation, in response to environmental stress, such as large storms disturbing the seafloor.

The authors add that the lobsters save energy by traveling in a line because it reduces drag and “also tends to reduce the probability of detection and attacks from predators by creating confusion in their visual perception.”

I know you’re thinking it, so I’ll just say it: Of course, the Sand People of Tatooine “always ride single file, to hide their numbers,” but there is zero evidence that the trilobites employed this tactic as a hunting strategy.

The fossil record preserves only a sliver of information about the past and, let’s face it, all the animals in that record were dead when the process of fossilization started. When an animal dies, the body is typically disarticulated, torn apart by scavengers or washed away in pieces.

So you might be wondering how these chains of trilobites were preserved as if in a snapshot of daily life.

Indeed, the Moroccan fossils have none of the features associated with post-mortem accumulation, when remains get deposited together due to currents or other environmental factors.

By studying the rock layer composition, the authors determined that the area was subject to storms with waves that could rapidly lay down significant amounts of fine sand.

During a storm, the team suggested that the waves’ power, and amount of sediment deposited, would have been enough to cover the trilobites without actually washing them away, preserving them in situ.

It’s also possible, they claim, that a significant storm could stir up enough sediment to release trapped hydrogen sulfide and poison the water. This would have killed the trilobites almost instantly, before they had time to scramble away. There are examples of trilobite clusters from later in the fossil record that appear to have perished from sudden anoxia, or lack of oxygen, in the water.

One clue that they met their end quickly: trilobites, like some modern arthropods, can curl into a ball when threatened. None of the Morocco specimens did so. And if they were buried quickly by storm sediment, that would explain why no other animals had time to scavenge their remains.

While questions remain about what the trilobites were doing all in a row, and just how they died, the findings hint at the surprisingly modern collective behavior of some of Earth’s early residents.