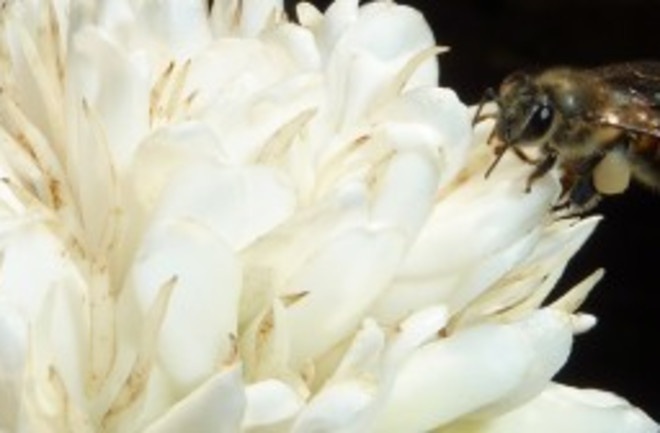 Honeybee visiting a coffee flower. Caffeine has been a part of human cultural heritage for more than five thousand years. From ancient teas and coffees to todays energy drink craze, you could say that as a species, we're hooked. But we're not the only ones — a new study published in Science today has found that pollinators get a daily buzz off caffeine, too, and it keeps them coming back for more. It was originally thought that plants produced caffeine as a pesticide, which is, in part, true. Caffeine in leaves and seeds can paralyze and kill some insects that feed on plant parts, preventing damage. Some plants, like Coffea arabica or Mountain Coffee, also release caffeine into the soil around them that inhibits the growth of other seeds, thus giving their seedlings a competitive advantage. For the past few decades, these were thought to be the uses of caffeine to plants: keep insects away, enhance seedling survival. Yet, scientists have found low levels of caffeine in plant nectars, which seems a puzzling place for an insecticide. Caffeine has a bitter taste, so not only is it dangerous to produce in nectar because it might harm the pollinators the plant relies on, it could simply deter them. After all, bees are adept at detecting and avoiding toxins. Yet the team, led by Dr Geraldine Wright from Newcastle University, found that citrus and coffee plants produced low levels of caffeine in their nectar — almost as much caffeine as a cup of instant coffee. What benefits, they wondered, could this caffeine be providing? In humans, caffeine is a central nervous system stimulant, making us feel more alert and awake. Some early studies suggested that it also improves short and long term memory, but findings have been inconsistent. Most importantly, though, low doses of caffeine activate the reward system in our brains, contributing to its addictive nature. So, the team wondered if the same was true for bees. They trained bees to associate a floral scent with tasty sugar solutions dosed with different amounts of caffeine. Even low doses of caffeine had a profound effect on the bees' long tem memory: when given nectar-levels of caffeine, three times as many bees remembered the conditioned scent a day later and responded to it as if expecting their sugary reward, and twice as many still remembered three days later. But to really understand why, the scientists examined honeybee brains. They found that doses of caffeine primed neurons in the bees' brains associated with learning and memory formation, making it easier for them to fire. The overall result is that the bees are able to pair scent with location faster and more easily. The caffeine boosts their memory-making ability. The scientists believe that the low levels of caffeine found in citrus and coffee nectars have an important ecological role, providing pollinators with a jolt that helps them remember where a plant is and return more often. "Remembering floral traits is difficult for bees to perform at a fast pace as they fly from flower to flower" explains Dr. Wright. But, the scientist found, caffeine-spiked nectars enhance the bees' memory. "Our experiments suggest that by affecting a pollinator’s memory, plants reap the reproductive benefits arising from enhanced pollinator fidelity," conclude the authors. The enhanced memory is a win for the bees, too. "Caffeine in nectar is likely to improve the bee's foraging prowess" says Dr. Wright. Today, honeybees are in decline worldwide, losses which are being felt strongly by the agricultural industry. This study gives us a better understanding of how bees find and choose plants to pollinate, which may prove vital information for farmers. Planting species like coffee and citrus amongst crops might improve pollination, or, genetic modification might be able to help make crops that bees prefer. The more we know about bee foraging, the better a chance we have at keeping them around and healthy, both for their sake and ours. Studies like this one not only teach us more about bee brains — they also shed light on our own. While human brains are significantly more complex than those of pollinating insects, there are many similarities. As co-author Dr. Julie Mustard explains, "Although human and honeybee brains obviously have lots of differences, when you look at the level of cells, proteins and genes, human and bee brains function very similarly. Thus, we can use the honeybee to investigate how caffeine affects our own brains and behaviors." "What we see in bees could explain why people prefer to drink coffee when studying," added Dr. Wright. Citation: