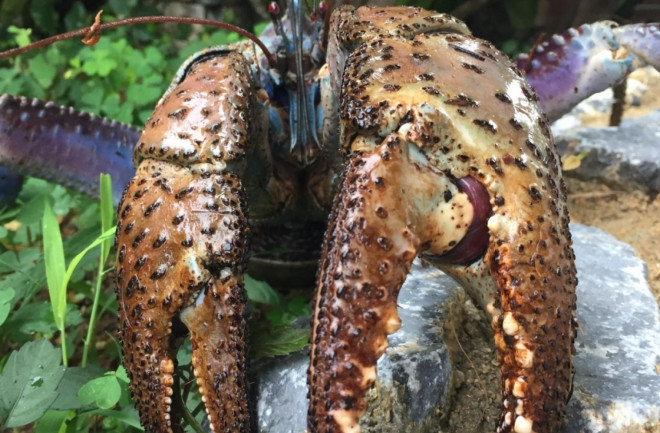 A coconut crab. (Credit: Shin-ichoro Oka/PLOS.org) Talk about a powerful handshake. Researchers have measured the crushing grip of coconut crabs, the largest hermit crabs on Earth, for the first time, and the results are imposing. The crustaceans' claws are capable of exerting forces that rival a lion's bite, researchers from Japan’s Okinawa Churashima Research Center say. They think this impressive show of strength is partly an adaption to their shell-less existence, swapping out formidable weaponry for protective defenses. Coconut crabs are found on islands in the Pacific Ocean from Japan to the Indian Ocean. They are the largest land-dwelling invertebrates, and grow up to three feet in diameter. Although they spend the majority of their lives in burrows on land, their lives begin in the ocean as larvae, where they colonize empty gastropod shells. Eventually, they migrate to land, where they lose the ability to live underwater and grow hard exoskeletons, shedding their shell homes.

The researchers took a relatively straightforward approach to testing coconut crabs' grip — they simply inserted a steel rod with force sensors into their claws and waited for them to squeeze. The experiment wasn't without its dangers, however. Author Shin-ichiro Oka said that he was caught in their vise-like grip several times during the course of the study; the experience was far from enjoyable. "Although it was a few minutes, I felt eternal hell," he said, speaking to the Washington Post. . Oka and his team tested 29 crabs, and found that the strength of their claws correlated quite well with their body size. Strength did not appear to depend on sex either — both males and females were equally capable. Based on their data, they say that the largest coconut crabs, weighing around nine pounds, should be able to clamp down with 3,300 Newtons of force — around 740 pounds and more than 4 times as much as our own grip, despite weighing far less. By comparison, alligators exert over 16,000 Newtons of crushing force when they bite down. Pound-for-pound, however, the crabs are one of the strongest animals on Earth. The researchers published their work last week in the journal PLOS One.

Let The Claws Do The talking

As their name suggests, coconut crabs feast on the tough-shelled fruit, although it is far from their only source of food. They also consume fibrous husks of trees, dead animals, other crabs, and even their own exoskeletons following a molt. If they want to snack on a coconut, the crabs will even climb up the trees to get at the treats and drop them onto the ground to break them open. Often, instead of climbing back down, they simply fall off the tree. Then, they set to work with their claws, prying the coconut apart to get at the sweet milk inside. How the crabs got so strong is still partly a mystery, and the researchers found that their grip exceeded even their own expectations for how strong they should be. The ratio of strength to body weight for coconut crabs was significantly greater than what they predicted, based on muscle mass alone. In particular, the crabs possessed shorter sarcomeres, a type of muscle fiber, than they should have, meaning that they somehow managed to leverage their muscles in unexpected ways. Due to their size, the crabs are a prized delicacy in their native Pacific Islands. Overhunting has brought worries about their survival, however, the IUCN has not labeled it as endangered because an accurate census of their numbers does not exist.