Closing the Out of Africa migratory loop 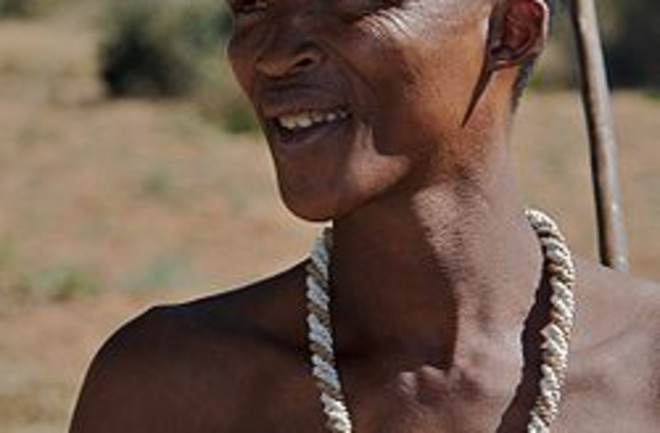 Related to Muhammad?Credit: Ian Beatty Last year a paper came out in AJHG which reported that Ethiopian populations seem to be a compound of West Eurasians and Sub-Saharan Africans. This is result itself is not too surprising for a host of reasons. First, Ethiopians and other populations of the Horn of Africa are physically equidistant between West Eurasians and Sub-Saharan Africans. 20th century physical anthropologists sometimes placed them in the "Caucasoid" racial classification for this reason. Second, the languages of the Horn of Africa have Afro-Asiatic affinities. The Cushitic languages (e.g. Somali) have deep connections with more familiar tongues such as Arabic, but Semitic Ethiopian languages (e.g. Amharic) are much closer in historical distance. Third, there has been a fair amount of previous genetic analysis of these populations, and their synthetic character was obvious from those (e.g. mtDNA and Y results suggest a diverse array of haplogroups). What the AJHG paper reported was that the Eurasian ancestors of the Ethiopians admixed with the presumably Sub-Saharan indigenes ~3,000 years ago in a single pulse event, and, their closest modern relations in West Asia today are Levantines. To put a mild gloss on it the dating is controversial (using patterns of decayed genetic correlations of markers across the length of the genome). This is not just clinal variation. As I have notedif this dating of the admixture is correct then modern Ethiopians as a coherent biocultural entity post-date Egyptian civilization by thousands of years. During the reign of Hatshepsut, ~1500 BC, there was a trade delegation send to the land of Punt (probably Somaliland). The depictions of the people of Punt by the Egyptians were very strange, insofar as they did not look Sub-Saharan African, and, the queen of Puntland seemed to exhibit steatopygia more common among the Khoisan people. I posited speculatively that during this period of ancient Egyptian civilization East Africa was in ferment in regards to its population mix. The Bantu people who dominate the landscape of Sub-Saharan Africa east and south of Cameroon only began to expand in earnest after 1000 BC (reaching southern African about 1,500 years ago). It seems plausible that the range of Khoisan-like peoples was much further north and east than is the case today. Additionally, there are likely to have been other populations, currently uncharacterized, present on the landscape (it may be that the Khoisan loom large only because their distribution was such that relic populations survive to this day to be studied). The Tishkoff lab for example has a paper in preparation on the presumed Sub-Saharan African populations present in the Horn of Africa when West Eurasians arrived (the Sub-Saharan component of highland Ethiopians does not seem to be Bantu-like). I bring all this up again because Dienekes highlights an abstract by Joe Pickrell at next weeks' SMBE 2013:

The history of southern Africa involved interactions between indigenous hunter-gatherers and a range of populations that moved temporarily or permanently into the region. The influence of these interactions on the genetic structure of current populations remains unclear. Here, using patterns of linkage disequilibrium, we show that there are at least two admixture events in the genetic history of southern African hunter-gatherers and pastoralists: one involving populations related to Niger-Congo-speaking African populations, and one which introduced ancestry most closely related to west Eurasian (European or Middle Eastern) populations. We estimate that at least a few percent of ancestry in the Khoisan is derived from this latter admixture event, which occurred on average 1,200-1,800 years ago. We show that a similar signal of west Eurasian ancestry is present throughout eastern Africa; in particular, we also find evidence for two admixture events in the genetic history of several Kenyan, Tanzanian, and Somali populations, the earliest of which involved populations related to southern Europeans and which we date to approximately 2700 - 3300 years ago. We thus suggest that west Eurasian ancestry entered southern Africa indirectly through eastern Africa. These results demonstrate how large-scale genomic datasets can inform complex models of population movements, and highlight the genomic impact of largely uncharacterized back-to-Africa migrations in human history.

The Khoisan here are not specified, so I took the liberty of putting an image of a Bushman at the head of the post.

But it seems more plausible that they would be Khoi, who received cattle-culture from non-Bantu populations (they had them when the Bantu arrived) at some point in the distant past.

There is already evidence that the enigmatic Sandawe people of Tanzania have old Eurasian admixture, so this would not be particularly surprising. The Sandawe language has affinities with that of the Khoisan (clicks), though the broader language family as a coherent entity is still controversial (some of the Bushmen languages themselves may not really have a close affinity, aside from broad distinctive similarities such as clicks). The whole question of the ethnogenesis of the Sandawe people seems clouded until we get denser population data sets in terms of geographic coverage.

Jan Jonker Afrikaner, leader of the Oorlam people As for how Eurasian ancestry might have entered into the Khoisan, that is a process which is easy to imagine, because more recent European and Asian ancestry has entered into these populations over the last five centuries in ways which have been recorded by history. Some of this has been through organized ethnic amalgamation as one people become assimilated into another (just as the Alans assimilated into the Vandals in Spain after their defeat by the Romans). Consider the case of the Oorlam people, who are now part of the Nama Khoi tribe in Namibia. In the period between the rise of modern South Africa in the early 20th century and the initial founding of the Cape Colony in the 18th century a large number of multiracial individuals of Northern European, Asian (Indian and Indonesian), and native (Khoisan, and later Bantu) origins arose from various contacts (relationships between European men and slaves, relationships between African and Asian slaves, etc.). The most well known of the resultant people are the Cape Coloureds. Though Afrikaner in language, and Dutch Reformed in religion, this population has a diverse racial heritage, and was relegated to second class status by white Afrikaners. Less famous, but still well known, are the Griqua, frontiers folk who created their own political units similar to what their white Afrikaner cousins achieved further east in the 19th century to escape colonial rule as well as racial oppression due to their 'bastard' status. Finally you have groups like the Oorlam, who like the Griqua attained some superiority over native populations via their European cultural heritage & connections further into the bush in Namibia, beyond the farthest frontiers of Dutch republics and British South Africa. But they were eventually submerged into the Khoi Nama after a series of defeats imposed upon them by a Bantu tribe. What you see here is a shift in the balance between European and native cultural traditions being salient as a function of distance from the Cape Colony (some Griqua men were known to have disappeared into the desert and assimilated into their "mother's kin," probably explaining how some Bushmen have European and Asian ancestry). It seems entirely possible that this sort of dynamic may have played out in antiquity in Africa (and other places). In some cases where demographic preponderance and environmental conditions were amenable the amalgamated populations maintained a large degree of affinity with Eurasians, rather than going "native." This is certainly the case in the Horn of Africa, where Ethiopian polities intervened in Arabian affairs, and became part of the Oriental Orthodox community of polities (which includes the Copts of Egypt, Armenians, and Syrian Orthodoxy). To a great extent Ethiopia was more a frontier of the West Eurasian oikoumene than part of Sub-Saharan Africa. In contrast you have a situation such as that of the Sandawe, whose vague Cushitic affinities have long been suspected, but had become hunter-gatherers like their Hadza neighbors, and adopted broad elements of the language and culture of the Khoisan. Finally, you have the likelihood that the Khoi peoples only retained extremely useful cultural knowledge such as animal husbandry (and animals) from their Eurasian forebears, who in any case had ancestry likely mediated through Sandawe-like cattle herders of already hybridized nature.*

In the big picture what these results tell us is that the story of human prehistory is complex and multi-layered, and peeling it apart genetically is going to leave us with more questions than answers.

Ten years ago a simple story of Out of Africa ~50,000 years ago and subsequent fission between non-Africans (e.g. Europeans separation from Asians, Amerindians separate from Asians) was a robust stylized model we could live with and accept with a clean conscience. Today we are confronted with a more inscrutable world, with archaic and Holocene admixture littering the scene. A substantial proportion of the world's population (e.g. India) seem to be the byproduct of admixture between very distinct populations which merged less than 10,000 years ago. Much of Sub-Saharan African has been totally remodeled culturally and likely genetically over the past 3,000 years. Now there is a fair amount of evidence that eastern Africa has been subject to "back migration" over the past 5,000 years (though there have long been uniparental lineages which suggest this). A simple story of humans leaving African Eden is no longer viable, because Africa wasn't Eden for everyone, and modern Africans themselves have felt the stamp Eurasian migratory events, as well as extensive internal folk wanderings. Finally, I would say that perhaps the most genetically valuable people to study might be the Mbuti Pygmies of eastern Congo. I suspect they're the least touched by both the Bantu expansion and the Eurasian back migrations of all the Africans. At least I hope. * The Lemba of Zimbabwe are probably one of the clues to what occurred in Southern Africa over the past 2,000 years.