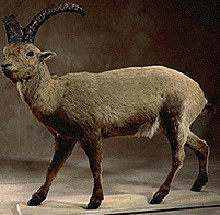 An extinct mountain goat that was once common in the Pyrenees briefly became the first animal to be brought back from extinction, as researchers used frozen DNA to produce a clone. But the newborn kid died within minutes of birth due to breathing difficulties, signaling that the Jurassic Park dream of resurrecting extinct species is still some way off. The Pyrenean ibex, or bucardo, is a subspecies of the Spanish ibex that is believed to have died out completely in 2000. Before the death of the last known individual (a 13-year-old female known as Celia), biologists captured her and took cells from her skin and ears, which were frozen in liquid nitrogen. An earlier cloning attempt using the skin cells failed during gestation. But the

latest attempt involved the creation of 439 ibex-goat hybrid cloned embryos made by inserting the cell nuclei of the ibex's skin cells into the egg cells of domestic goats which had their own cell nuclei removed. Of these cloned embryos, 57 were transferred into surrogate mothers and seven resulted in pregnancies, but only one goat gave birth and the newborn clone died after seven minutes as a result of lung deformities [The Independent].

Researchers say that other cloned animals, including sheep, have been born with similar lung defects, but they say that overall the experiment was a major step forward in the effort to bring the ibex back to its mountain home. Says lead researcher Jose Folch:

"The delivered kid was genetically identical to the bucardo. In species such as bucardo, cloning is the only possibility to avoid its complete disappearance" [Telegraph].

The failure to produce a viable clone from DNA that was frozen only a decade ago illustrates the difficulty researchers would face in trying to bring back species that have been extinct for decades, centuries, millennia, or epochs. Researchers have floated the idea of bringing back the Tasmanian Tiger, which went extinct in 1936, and others hope that woolly mammoths preserved in permafrost could one day be resurrected. Those efforts are still largely hypothetical.

There are, however, other serious proposals for cloning endangered animals, such as the giant panda, the African bongo antelope, the Sumatran tiger and the pygmy hippo. The method's advocates believe it offers hope of preserving the genetic diversity of these animals before they die out [The Independent].

Related Content: 80beats: Will Dog Cloning Become Mainstream as the Price Drops? 80beats: Extinct Tasmanian Tiger May Have Screwed Itself by Inbreeding 80beats: First Commercial Dog Cloning Operation Yields Five Little “Boogers” 80beats: Scientists Clone a Mouse From the Deep Freeze; Woolly Mammoths Could Be Next 80beats: Your Quarter-Pounder Just Might Have Come From a Cloned Cow (Indirectly) DISCOVER: Bringing the Tasmanian Tiger Back From the Dead DISCOVER: Cloning the Woolly MammothImage: Wikimedia Commons