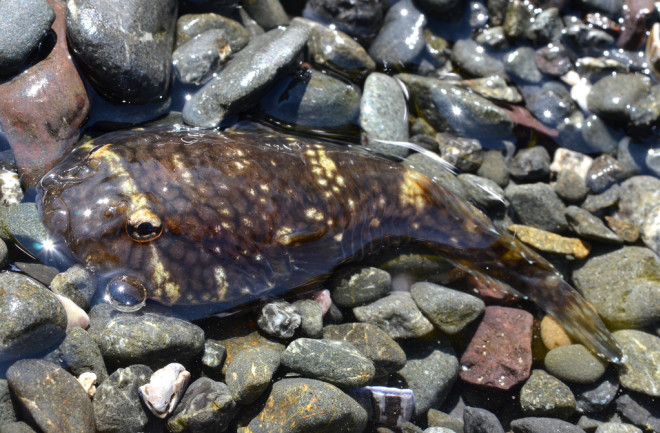 Northern clingfish (Gobiesox maeandricus). Image courtesy of loarie/Flickr You know that pesky soap holder whose suction cup never stays attached to the shower wall? Scientists may now have a solution: mimic the clingfish. These fish live in the intertidal zone---the area at the ocean's edge where waves are constantly crashing against algae-covered rocks. Despite strong currents and even stronger waves, clingfish survive here by using the mechanism that earned them their name: they cling to the rocks with an adhesive disc on their abdomens that is unhindered by rough, slippery or wet surfaces. With this grip engaged, the fish can prey on mollusks attached to the rocks. We're talking an unstoppable suction that is also fast and reversible. Researchers wanted to see exactly how the suction cup of a clingfish works, and how it compares to commercial versions, so they pitted 22 clingfish against eight different sizes of suction cups, ranging from 1.5 to six inches in diameter. The researchers used dead clingfish because previous studies had shown the dead fish could still suction with 96 percent the tenacity of live fish. The fish and store-bought suction cups were attached to a range of surfaces in water, from smooth glass to coarse sandpaper. In each case, a machine would pull very slowly on the fish or suction cup until it released. In the final analysis the clingfish blew all of the suction cups out of the water. The adhesive force of the clingfish was 80 to 230 times the body weight of the fish. On the smoother surfaces, the dead fish were able to hold on for an hour or more despite the pulling of the machine.

Zooming in to show the structure of the microvilli on the adhesive disc of the northern clingfish. Image courtesy of Wainwright et al./Biology Letters On closer inspection, the researchers determined there were two forces working together to keep the fish's grip discs in place: adhesion and friction. Adhesion creates an area of low pressure between the rock and the disc that seals the it to the surface, and friction prevents that disc from sliding around. And the trick to the fish's ultimate suction cup is a ring of hairlike structures surrounding the clingfish's disc. These tiny hairs increase the surface area of the disc, which in turn increases friction and keeps the suction sealed tight. The researchers published their findings today in Biology Letters. Though the scientists probably won't use their findings to make better soap holders, the results could lead to improved clingfish-inspired adhesives that, unlike gecko-inspired materials, can stick to rough surfaces, even when they're wet.