An international group of scientists have recruited a team of unlikely research assistants to help them study the Southern Ocean that surrounds Antarctica - elephant seals. Boldly going where current buoys, satellites and ships cannot, the intrepid fieldworkers will help to fill blind spots in our knowledge of this most inaccessible of oceans. 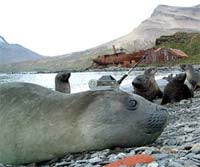 Our knowledge of the effects of climate change at the planet's poles is heavily skewed towards the Arctic. There, it's clear that the sea-ice cover is gradually shrinking. But at the opposite end of the world, in Antarctica, data is harder to come by. The Southern Ocean plays a vital role in exchanging heat between the atmosphere and surrounding oceans, and it's too important an area to know so little about.

Satellites and floats provide some readings, but there is a massive zone directly beneath the frozen continent is almost completely unobserved. At 19 million km^2, these hidden waters span an area greater than Russia. Satellites can't penetrate the thick cover of ice, Argo floats can't transmit through it and research voyages are difficult, slow and costly. Nor do these techniques tell us much about how thick the ice itself is and how quickly it's forming - both crucial measurements for understanding the effects of climate change.

While many professors might consider pushing their graduate students overboard and making them swim about with sensors, that might be a touch unethical. Instead, a team of scientists led by Jean-Benoit Charrassin decided to enlist the help of the southern elephant seal - an animal that is well at home in these ice-cold waters.

Southern elephant seals are the largest of the seal family, with the biggest males packing over 3 tonnes of muscle and blubber. While they are best known for the bloody fights that males engage in on beaches, the vast majority of their time is spent underwater, where they will travel great distances in search of food. On these foraging missions, they can dive to a maximum depth of 2 km, surpassed only by the sperm whale.

Charrassin predicted that these animals would cover a huge three-dimensional area that would help to fill in the enormous gaps in Antarctic surveillance. His team fitted 58 seals with state-of-the-art recording instruments developed by the Sea Mammal Research Unit at the University of St Andrews. These packages included an array of sensors for measuring temperature, pressure and salinity, and transmitters for sending the information to watching satellites. Everything was housed inside a tiny cap that was glued to the fur on the seals' heads.

The seals were incredibly active, swimming for 35-65km every day and repeatedly diving throughout their dips. Together, the 58 recruits provided as many data sets as the usual man-made measuring devices did. But it was the quality of the coverage that mattered.

Devices like floating buoys provide an excellent coverage of the sea-ice north of 60S but hardly any readings at more southerly latitudes. But the seals had no such difficulties; they ventured into areas completely untouched by the probes, including the entire eastern face of the continent. At these latitudes, they provided 9 times more data than the floats and ships did.

To add to their advantages, the seals' frequent dives under the ice itself provided the team with 30 times more information about these relatively uncharted waters than they would normally have. Many of these recordings were made in winter and autumn when data is particularly hard to come by. The seals really are the only way to obtain good data during the Southern winter and what's more, they are a fantastically cost-effective way of doing it.

The seal readings are already proving useful. For a start, the salinity measurements captured by their headgear have told Charrassin's group, for the first time, how quickly the sea ice was forming.

The data allowed the team to mark the full boundaries of the Antarctic Circumpolar Current, an ocean current that circulates around the continent and connects the Atlantic, Pacific and Indian Oceans. It's massively important; it keeps warm water from reaching the ice and affects the distribution of life around Antarctica, from the smallest krill to the largest whale. The ACC consists of three separate 'fronts', which until now could only be outlined in a few patchy areas. But with recordings from the seals thrown into the mix, the team were able to create maps of the fronts that were 2-3 times more comprehensive than before.

The seal project began as an attempt to better understand the physiology and behaviour of these superb animals, but Charrassin believes that the same technology could be used to further other scientific disciplines too. He envisages an entire fleet of marine predators, scouring the seas with fitted sensors. By relying on different species, including several types of seal, we can record data from disparate parts of the oceans. As he says, it would "provide a powerful and cost-effective means to make the ocean-observing system truly global".