To combat a wartime cork supply crisis, industry heads and government convinced Americans it was their duty to plant and nurture trees. 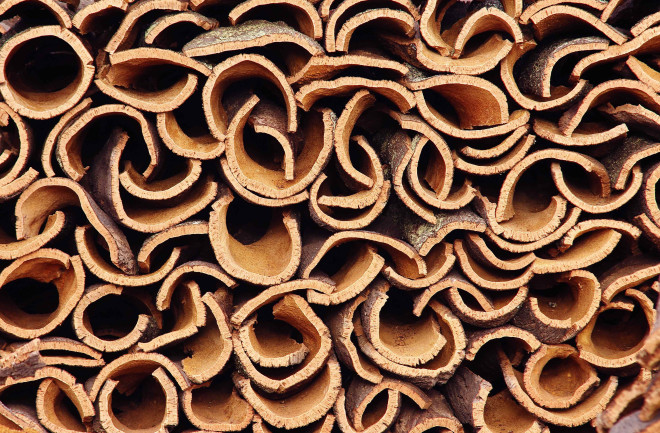 Cork had enjoyed commercial value for centuries, of course, in wine bottles and fishing equipment, among other uses. But during the first half of the 20th century, the spongy material from the bark of the cork oak (Quercus suber) gained much wider use as an industrial sealant and insulator. Ground up and pressed into molds, from which thin sheets could be cut, this “composition cork” took full advantage of cork’s pliability.

A cork oak grove in Portugal has recently had its bark harvested. (Credit: Rosshelen/Shutterstock)

When companies around the world realized they could press composition cork into gaskets and other fluid-tight seals, the material’s prospects soared. As the Baltimore Sun reported in 1941: “It is pulverized for the manufacture of insulation for buildings, refrigerators and ships. It goes into the soles of shoes, life preservers, floats to register the quantity of liquids of tanks, bobbers for fish lines, tips for cigarettes, handle grips and in cartridges and bombs.” By 1940, American industries imported around half of the world’s cork, mostly from forests in Europe and North Africa (mainly Portugal, Algeria and Spain).

Cork was becoming increasingly essential to American industry — but a looming war would soon put its supply in jeopardy.

The Nazi blockade of the Atlantic Ocean began in late 1939, and increasingly affected imports for the U.S. in the early ’40s. America would be able to get by on its existing stores of cork for a while, but not forever. Just weeks before the attack on Pearl Harbor in 1941, a government report titled “Cork Goes to War” provided a sobering realization of the problem.

The answer, it increasingly seemed, was no.

Youth groups such as this Mendocino County 4-H Club were a key audience for the cork oak planting campaigns. (Credit: Woodbridge Metcalf)

U.S. officials declared cork a “critical” material — a resource less difficult to procure than the “strategic” materials that were essential for defense, like copper and carbon steel, but nonetheless crucial for the nation. Day noted that in 1940, the Office of Production Management “decided upon industry wide control over cork supplies.” By 1941, the government had ordered companies to reserve their cork inventories for defense needs. An Associated Press story printed in The New York Times on July 7, 1941, reported that the Commerce Department suggested rationing cork, as “no suitable substitute … is at present in production.”

This was largely thanks to the material’s unusual physical properties: “It is made up of minute cells, each filled with air, the air space accounting for about half its volume. Hence its extraordinary buoyancy and resilience,” Day wrote in her report. No other natural substance came close. Even today, the Portuguese Cork Association points out its unique squishiness among unprocessed solids: Pressing on one side does not cause another to expand. Cork’s flexible cell structure also allows it to hold up to changing pressure and temperatures.

That at one-of-a-kind versatility was bad news for companies like Crown Cork & Seal, a Baltimore based bottle cap and packaging company — and one of the biggest American importers of cork. On one side, their incoming supply was being threatened by the Nazi blockade; on the other, Uncle Sam was saying the existing cork stock must be held for government use only. So Crown Cork President Charles McManus assigned his staff chemist, Giles Cooke, to find a solution. Cooke eventually realized the only fix was the simplest one: For America’s supply of cork to be assured, the country would need to grow its own trees.

America didn’t have the centuries of experience Portugal and Spain had in growing cork, but it did have a history of tree-planting campaigns. As historian Jill Jonnes notes in her book Urban Forests, Americans have cultivated an annual tradition of tree planting since the first Arbor Day in 1872. And after World War I, the secretary of agriculture wrote to every state governor to suggest planting memorial groves to honor fallen American soldiers.

The growing zone for cork oaks cuts a swath across the southern U.S. (Credit: Jay Smith)

Cooke consulted with arborists to chart the climate zones across the U.S. where cork oak could grow and thrive. As it turned out, American industry was in luck: The growing zone stretched across the South and up both the East and West Coasts. Next, Cooke talked with and wrote to politicians and state governments, suggesting Crown Cork could provide the seeds if the states rallied the muscle.

The result was a successful nationwide treeplanting campaign to grow cork oaks. Kids could mail off a request and receive a package of acorns and instructions for planting. Throughout World War II, young 4-H and garden club members joined in tree-planting efforts, eager to do their part for the war effort. Their work was recognized and promoted by governors at Arbor Day celebrations and other festivities. All told, young people planted millions of acorns, resulting in thousands of viable trees that would produce cork for harvest after bout 20 years of growing. Some are still alive today.

But Cooke knew we would need trees sooner than in 20 years, so he pushed for a second effort, involving the cork oaks already growing in the U.S. Leading the hunt for the trees was Woodbridge “Woody” Metcalf, a forestry professor at the University of California, Berkeley, who scoured existing forests for the cork oaks. His team found thousands across California, most planted in the late 1800s. Arizona and a few other Southern states contained the trees in much smaller quantities, but there was enough to one day ensure a long-term domestic cork supply — especially since, after testing, scientists deemed this domestic cork just as good as European cork. Cooke and Metcalf ’s two-pronged approach promised a steady supply of the critical material.

After the war, international commerce resumed, and Portugal and Spain once again supplied America with cheap cork. Our country’s trees now simply grow free cork, and few people around them recognize the bounty. They remain a legacy of how the right circumstances can motivate viable tree planting campaigns in this country.

Gov. Earl Warren (with shovel) plants a cork oak tree on the state capitol grounds for California’s Arbor Day in 1944. (Credit: Giles B. Cooke Collection/Swem Library/College of William and Mary)

Today, climate change may pose similar circumstances. Scientists and others have suggested that addressing climate change will require a World War II-like mobilization. And while the U.S. is the second-highest contributor of carbon dioxide emissions, the whole world will share in the consequences. “The climate crisis is wreaking havoc on some of the most vulnerable countries and regions,” said Deputy Secretary-General of the U.N. Amina Mohammed in a June 2019 speech. By not doing more to cut down on carbon emissions, developed countries are “contributing to conditions that are causing droughts and floods halfway around the world.”

Yet there is still reason to hope. Young people could again commit to battling a larger foe and recognizing trees’ role in storing greenhouse gases: According to a 2019 study in Science, restoring forests — though logistically tricky — could cut atmospheric carbon levels by up to 25 percent. Could saving the environment be the basis for another federally backed nationwide horticultural operation?

“To this day, I don’t understand why there’s not a vast tree-planting campaign everywhere, all over the world,” says Jonnes. “I think it’s still a very viable way to do things.”