Black squirrels — a relic of ancient, old-growth forests — are now more common in cities. To understand why, scientists want to track the color of squirrels in your backyard. 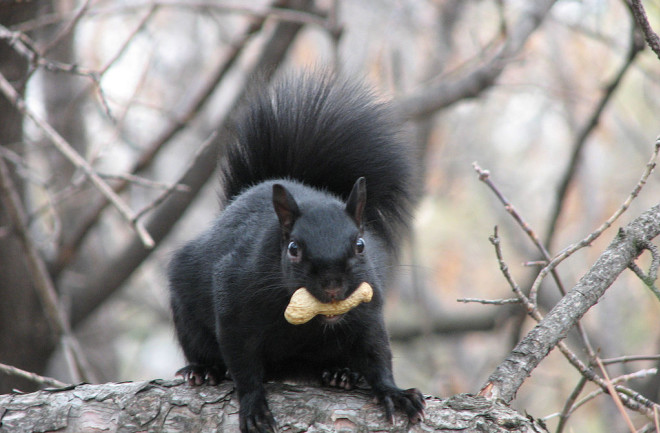 In 1902, an international trade deal was brokered between the U.S. and Canada. Frank Baker, superintendent of the Smithsonian National Zoo in Washington, D.C., had been working on the deal for some time. In a letter from 1900 sent to several addresses in Ontario, Canada, Baker explains he is “very desirous of obtaining” a particular animal for the National Zoo and was searching for a contact who could “furnish these animals.” Then, in his 1902 report to the U.S. Congress, Smithsonian Secretary Samuel Langley confirmed that eight of the desired animals were received from Rondeau Park on the shore of Lake Erie in Ontario in exchange for some animals from D.C. What was it that Frank Baker was so desirous of? What animal could be found in Ontario, Canada, but was missing 350 miles south in D.C.? Squirrels, of course. But not just any squirrels. Black squirrels.

If you visit Washington, D.C. today, it’s not hard to spot a black squirrel. They’re all presumably descendants of squirrels introduced from Canada.

However, if you ask residents in other parts of eastern North America about the color of squirrels, their responses will depend on where they live. Residents in rural or suburban areas of the northeastern U.S. or southeastern Canada will probably say squirrels are gray. In fact, the official common name of the species (Sciurus carolinensis) is the Eastern Gray Squirrel. But talk to someone who lives in Toronto or Detroit, and they’ll likely tell you most squirrels are black, and some are gray. And if you could jump in a time machine and walk through the old-growth forests of the northeastern U.S. 200 years ago, you’d likely see that most squirrels were black.

Why Are There Black Squirrels?

The gray and black morphs, or versions, of eastern gray squirrels are simple genetic variants. With the black variety, a form of melanism increases the dark pigment in their fur. Because coat color is genetic, any changes in the prevalence of each morph over time or between cities may be the result of biological evolution. But why do these coat color changes occur? That’s the question we’re trying to answer with the help of citizen scientists. Gibbs first got interested in squirrel coat color because there’s a large population of black squirrels in Syracuse, New York, where he works, yet very few black squirrels in the rural forests outside the city.

Scientists call this kind of change in a trait along an environmental gradient a “cline”. To test whether clines in squirrel melanism are common along urbanization gradients in multiple cities, we developed a squirrel tracking citizen science project called SquirrelMapper.

SquirrelMapper lets people anywhere in the world submit location-tagged photos of squirrels to iNaturalist, a popular mobile app that has over 56 million sightings of all sorts of organisms. So far, users have submitted over 75,000 observations of eastern gray squirrels, each checked by other users to make sure the species identification is correct. The photos are then imported to Zooniverse, another citizen science platform that lets people participate in research by classifying photos. At least 10 people classify each squirrel’s coat color as “gray”, “black”, “other” (for example, rare white morphs), or “unclear.” More than 35,000 people have helped observe and classify squirrel coat color with SquirrelMapper. The data is uploaded in batches for users to check. But even after each image has been gone over 10 times, users can classify squirrels in older images to help make the results more accurate.

Once analyzed, SquirrelMapper plots those observations to show where the different color morphs are found. Interestingly, the results have confirmed Cosentino’s and Gibbs’ suspicions that black squirrels are most common in cities. For example, black squirrels are rare in rural areas surrounding Washington, D.C., but can make up some 40 percent of the squirrel population in pockets of the city. The results have also corroborated other patterns, like black squirrels being more common at cold, northern latitudes.

Our team is now embarking on a new project funded by the National Science Foundation to better understand why black squirrels are most common in cities and rarer in rural forests. Our hypothesis is that changing environmental conditions in forests and cities is affecting how well each morph survives in these habitats.

For example, when black squirrels were common in forests until a couple centuries ago, these ecosystems were “old growth,” and offered a dense, dark environment. However, around 200 years ago, European settlers cleared the North American old-growth forests. Now nearly the entire region is rich with young, regenerated forest, which is much more open and visually simple.

So, black squirrels may have been better camouflaged from hunters and other predators in dark, old-growth forests, whereas they might be easily seen against the lighter background of younger forests on the landscape today.

To test this hypothesis, we’re developing a so-called hidden object game called “Squirrel Finder.” The goal is to measure how quickly people detect each color morph in different environments. Early data from the game shows that it’s easier for people to spot the black morph in young forests than in old-growth forests.

The game has also shown that people detect black squirrels on a road surface faster than the gray morph. Cars are one of the biggest threats to city squirrels, and these results suggest that drivers might have an easier time avoiding black squirrels than gray because the black morph is easier to see on the road.

In addition to inviting the general public to contribute to the project, we’re working with N.Y. Master Science Teachers to incorporate SquirrelMapper activities into their K-12 curriculum to allow students to investigate “schoolyard evolution.”

How Urbanization is Driving Evolution

The descendants of those black squirrels brought to the Smithsonian National Zoo in Washington, D.C. in 1902 still thrive today, as do other black squirrel populations in small pockets around the United States and Canada. The reasons why they survive remain unclear, but our team thinks the ubiquitous squirrel might be hiding secrets in plain sight about how changing forests and urbanization can cause evolution.

Cities are home to over half the world's human population and that growing urbanization is still transforming the environment. Knowledge gained from squirrels could inform our understanding of how other organisms respond to urbanization and other forms of environmental change, and how we might plan for more sustainable, biodiverse environments. Citizen science will continue to be a key part of studying these questions, and your contributions can make a difference.

To get started, head to the SquirrelMapper project affiliate page on SciStarter. After you’ve created an account, add your Zooniverse or iNaturalist name under "Info & Settings" to earn credit for your participation through your SciStarter dashboard.