City mockingbirds can tell the difference between individual people

While the rapid expansion of human cities has been detrimental for most animals, some have found ways of exploiting these brave new worlds and learned to live with their prolific inhabitants. The Northern mockingbird is one such species. It's very common in cities all over America's east coast, where it frequently spends time around humans. But Douglas Levey from the University of Florida has found that its interactions with us are more complex than anyone would have guessed. 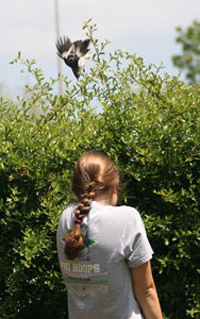 The mockingbird has the remarkable ability to tell the difference between individual humans, regardless of the clothes they wear. After less than a minute, they can tell one person from another and adjust their responses according to the threat they pose to its nest. This ability suggests that these birds are both intelligent and very flexible in their behaviour - two traits that must surely stand them in good stead in the urban jungle.

It obviously benefits an animal to be able to distinguish between threatening and harmless species, but discriminating between individuals of the same species is a much more difficult task - just think about how difficult you would find it to tell the difference between two mockingbirds by eye.

Levey worked with 24 pairs of mockingbirds that had taken up residence on the university's campus. Hundreds of people walk within five metres of their nests every day and elicit absolutely no reaction. To simulate a greater threat, Levey asked one of his colleagues to approach the nests of birds with fresh clutches, and touch their rim for 15 seconds. When faced with such intrusion, mockingbirds will typically react by rallying from the nest, making alarm calls and diving aggressively at the trespasser. 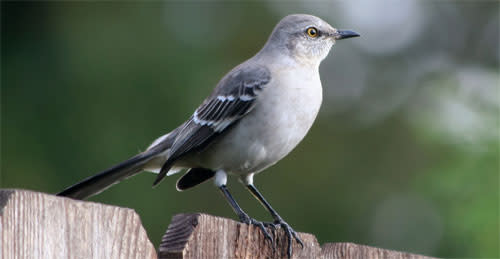 Initially, the same intruder approached the nest for four days in a row, each time wearing different clothes. Despite their changing garments, the birds seemed to recognise them and reacted more aggressively as the days went by. They flew from the nest when the human was further away, they make more alarm calls and they were more likely to attack.

That could simply reflect a generally rising state of panic, but the events of the fifth day put paid to that idea. At that point, the intruders swapped and a different person approached the nest in exactly the same way. Faced with this new intruder, the birds reduced the degree of their alarm to the level of the first day. To Levey, this simple experiment clearly shows that the mockingbirds quickly learned to recognise people who approached their nest. 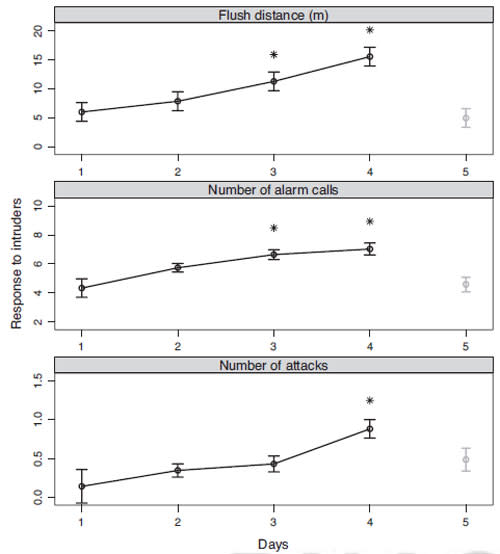 Many animals can tell the difference between individuals of their own species. But, anecdotes aside, there are relatively few reports of them pulling off the same trick with members of other species. Chimps can apparently do it from photos, prairie dogs from sound and cattle from smell. And animals from pigeons to honeybees have shown some skill in distinguishing between photos of humans in experimental conditions. But the mockingbirds in Levey's study passed a very realistic and difficult test - they had to tell one individual apart from thousands of others, all of whom changed their appearance on a daily basis.

They also did it with incredible speed. Within just two approaches by the human intruder, each one lasting just 30 seconds, the birds started behaving more aggressively. This means that a mockingbird can learn to recognise a new individual within less than a minute. In virtually all studies where other animals have learned to identify or classify individuals of other species, they have required 10-1000 times more training. 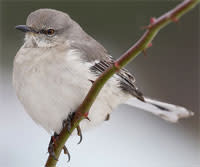 The fact that a songbird like the mockingbird can do this strongly suggests that other birds can do the same. In particular, the intelligentsia of the bird world - crows, jays and parrots - should be all too capable of distinguishing between individual humans.

If mockingbirds can tell the difference between individual humans, it's likely that they can do the same for individual cats, raccoons and other egg thieves. Indeed, it will be interesting to see if rural mockingbirds have the same ability. But Levey doesn't think that the urban populations have evolved a specific ability to tell humans apart. Rather, he suggests that mockingbirds are generally perceptive and learn quickly, traits that allowed them to colonise urban environments. Moving from rural areas to the big, bad city poses many unfamiliar challenges, including many new predators intending to kill a mockingbird.