City Birds Are Adapted for Every Kind of Stress 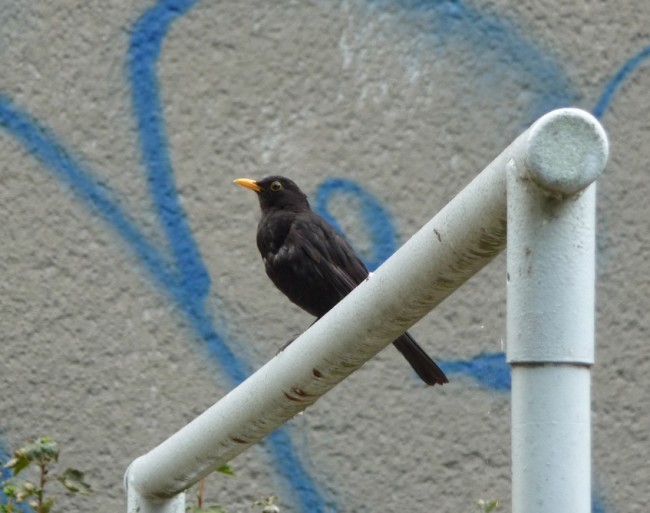 Whether you make your home in a high-rise apartment building or a drainpipe, city life has a different pace than country life. Urban environments mean an endless series of challenges for your mind and body: noise, crowds, pollution, quick decisions while facing oncoming vehicles. City-dwelling humans like to think of themselves as tough and not easily rattled. Whether that's true or not, it does describe city-dwelling blackbirds, which can handle any kind of challenge without showing signs of stress. ("Any kind of challenge," in this case, includes loud radio playing, temporary kidnapping, and being chased with a plastic bag. But more on that shortly.) Eurasian blackbirds, or Turdus merula, live comfortably in habitats across Europe, Asia, North Africa, and even Australia. This made it possible for scientists to compare an urban population—one that's been living and breeding for many generations in downtown Munich, Germany—with a population from a nearby forest. David Costantini of the University of Glasgow and his colleagues captured baby birds from nests in both locations and brought them back to live in cages, where they were hand-raised. Two and a half years later, the researchers tested the now-adult blackbirds with a series of challenges. They planned to stress the birds out periodically over the course of a year, then check to see how well the birds' bodies had handled it. To measure this, they would look for what's called oxidative damage in the birds' blood. Oxidative damage comes from loose-cannon kinds of oxygen molecules that include the infamous "free radicals." We make these molecules naturally as part of our metabolism, but need to mop them up afterward using antioxidants. When an animal's body is under environmental stress, it may produce more of the dangerous oxygen molecules than it can keep up with. As these molecules ricochet through tissues, they cause chemical reactions that leave behind a molecular footprint scientists can see. Half of the urban blackbirds, and half the rural ones, were lucky enough to be in a stress-free control group. The other half of the birds experienced a very stressful year. Every few months, the scientists injected the birds with a molecule found in the cell membranes of bacteria that triggers an immune response, including fever. Twice, the birds underwent a 10-day stress-palooza. This included bouts of chasing (a scientist waved a net with a yellow plastic bag attached to it over the bird's cage), crowding (two or three extra birds were squeezed into a cage), restraint (the bird was briefly held in a cloth bag), and noise (loud radio playing: "predominantly top 40 pop music if I remember correctly," says Costantini). At the end of the year, the scientists drew the birds' blood once more to see how their oxidative damage compared to the start of the experiment. In all of the control birds, oxidative damage had gotten lower. Costantini says he's not sure why levels went down instead of staying the same, but it might be due to seasonal variation. In stressed-out urban birds, oxidative damage was also lower than before. But stressed rural birds had much more oxidative damage. The researchers also saw that rural birds responded to stress with higher levels of an antioxidant enzyme called GPX. But despite cranking out the antioxidant, they weren't able to keep up with the oxidative stress they were experiencing. "Antioxidant protection is never 100 percent," Costantini says. The high levels of antioxidants show that the rural birds' bodies were responding to the fevers and noise and plastic bags, but they couldn't quite handle it all. "Something happened to these birds that made them unable to mount a strong antioxidant response," Costantini says. "It might be that it would have been too demanding to do so." Birds from the city, on the other hand, showed no ill effects from their year of stress. Costantini thinks this means the birds are well-adapted for urban life. If a stressful environment caused a lot of oxidative damage in their tissues, birds might not survive or reproduce well in the city. But "the higher resistance to oxidative stress of urban blackbirds might have favored their successful adaptation to city life," he says. While their more sensitive cousins live out their days in the woods, urban blackbirds seem genetically suited to cope with any stressor the city throws at them. Humans, unlike birds, move around frequently. So any difference between city and country dwellers probably isn't one that's evolved. But people who most enjoy city life might be those who, like urban blackbirds, can handle any kind of stress–whether it's finding a taxi or being trapped near a radio blasting pop music.