Chopping Down the Amazon Causes a Short-Term Boom, Long-Term Bust 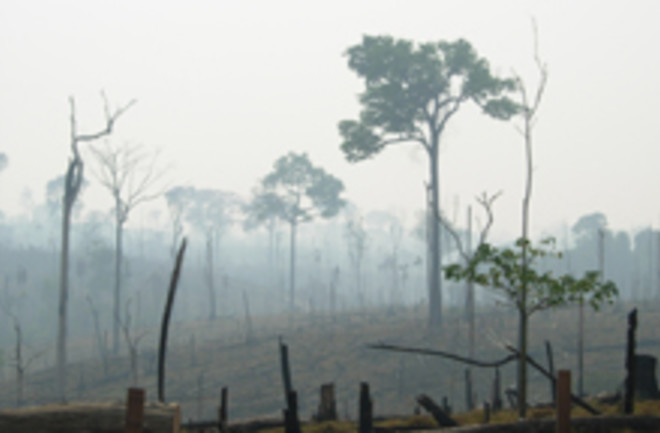 Leaving the rainforest of the Amazon standing has obvious benefits to the environment, as the living forests absorb and store carbon dioxide that would otherwise contribute to global warming. But cutting down the forests has been assumed to be the only route to economic development for the local people, as it provides work in the timber industry and then clears the way for farming and cattle raising. Now, a new study has found that deforestation brings only short-term and temporary economic benefits, in what researchers call a boom-and-bust cycle.

The researchers say the boom is probably due to a number of factors, including better roads and therefore better access to healthcare and schools. For a short while, the community benefits from the natural resources of the forest, and makes money off the timber and the farms that are set up in the cleared lands. But the soil is rapidly degraded making farming and cattle ranching unsustainable. "A lot of that land ends up being abandoned" [New Scientist]

, says lead author Ana Rodrigues. Once a town had passed through its period of deforestation, researchers found that the area's scores on such indicators as income, life expectancy, and literacy all dropped. The researchers hope that the study will provide

one more piece of evidence that forests — especially for those who depend on them — are ultimately worth more alive than dead [Time].

To provide an alternative to chopping down the rainforest, researchers are pinning their hopes on the next international treaty that will govern the world's response to global warming, which is expected to include provisions that reward countries that leave carbon-absorbing forests intact.

"Reversing this pattern will hinge on capturing the values of intact forests... so that local people's livelihoods are better when the forest is left standing than when it is cleared," [says study coauthor Andrew Balmford]. "Discussions being held in the run-up to this December's crucial climate change meeting in Copenhagen... offer some promise that this lose-lose-lose situation could be tackled, to the benefit of everyone - local Brazilians included" [BBC News].