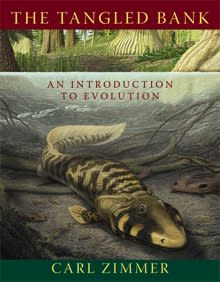 I'm thrilled that the evolutionary biologist Brian K. Hall has such great things to say about

in a review for Choice, the leading review journal for academic librarians (subscriber link): Those familiar with the books, newspaper and journal columns, and commentaries by Zimmer (e.g., Microcosm, CH, Sep'08, 46-0275; Soul Made Flesh, CH, Dec'04, 42-2220) will be delighted that he has turned his considerable writing skills to creating an accessible and superbly illustrated introduction to biological evolution. The best books on evolution are those that synthesize the processes of evolution (natural selection, mutation, the origin of variation, the role of development) with the patterns of evolution (the fossil record, phylogenetic trees, changes within and between species) and introduce readers to the major players and how they study evolution. Zimmer describes all these processes and patterns of evolution admirably, using his flair with language and substantial knowledge of biology--the latter aided by four scientific advisers, who have advised him well. Zimmer has a gift for finding just the right example to fascinate the reader, encouraging him or her to want to read on and learn more. The book is astoundingly well illustrated; it could serve as a coffee-table book as well as an up-to-date introduction to the changing ways in which evolution has been and is being studied. The inclusion of selected readings allows entry into the primary literature. A book to both browse and read in depth. Summing Up: Highly recommended. All libraries. -- B. K. Hall, emeritus, Dalhousie University