Chimps Use Tools to Improve Their Sex Lives 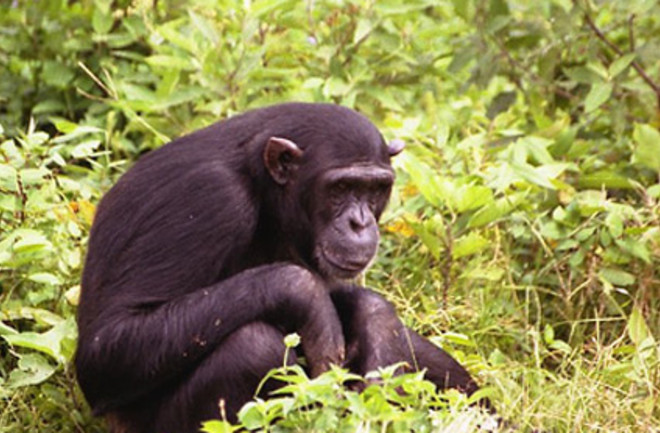 Chalk up another mark of chimpanzee intelligence--they not only use tools for gathering food, but also to improve their sex lives. The chimps don't have to duck into a sex shop to gather their erotic implements—the tools they use literally grow on trees. Researchers have documented chimps in a Tanzanian colony using brittle leaves in their mating rituals. In a botanical bit of foreplay, the male chimps grab dry leaves and break them apart with their hands or mouths, creating a distinctive raspy sound that signals their sexual readiness. Think of it as the chimp equivalent of putting "Let's Get It On" on the stereo. As researcher William McGrew explains (slightly graphically) to The New York Times:

“The male will pluck a leaf, or a set of leaves, and sit so the female can see him. He spreads his legs so the female sees the erection, and he tears the leaf bit by bit down the midvein of the leaf, dropping the pieces as he detaches them. Sometimes he’ll do half a dozen leaves until she notices.”

Eventually, McGrew continues, the female notices the male's aroused state and "puts two and two together." If she's interested, the mating can commence. And while this device may seem rather rudimentary compared to the sex toys that humans have come up with, McGrew says the leaves fit the definition of a tool, as the chimps are using a portable object in pursuit of a goal--in this case, hot chimp action. Related Content: Discoblog: For Chimps, a Rear End Is Worth a Thousand Faces

80beats: Chimps Don’t Run From Fire—They Dance With It

—what’s left to separate chimps from us?