Chimps console each other to reduce stress after fights

Humans are intelligent and social animals. We are devious in fending off competition, we use guile and strategy to attract partners, and we extend acts of kindness towards friends in need. Many people suffer through the inanity of reality TV for the odd glimpse of these social interactions. But humans aren't the only animals with complex social lives - those of chimps are just as fascinating and news of their exploits can be found in scientific journals.

Just this week, two new papers shed new light on the rich social lives of chimps. They are filled with just as much drama and deception as our own (and probably more intelligence than your average episode of Big Brother). I'll be writing about the results of these papers over the next two posts.

The first study looks at how chimps react to anxiety in other chimps. They will often extend companionship to individuals who are distressed after aggressive conflicts. Orlaith Fraser from Liverpool John Moores University has shown that these acts of consolation help to reduce the stress levels of the 'victims' and chimps most frequently console individuals with whom they share valuable social ties.

Of course, chimps often make up with each other after a fight but this may not always be possible or worthwhile for, for reasons that humans will find familiar. They run the risk of starting up trouble again, one party might not be interested, or the relationship might simply not be worth repairing. But even if reconciliation isn't advisable, it's still worth dealing with the high levels of stress hormones that conflicts can cause, especially because of the negative impact that stress has on the health of animals. That's where consolation comes in.

Together with Daniel Stahl and Filippo Aureli, Fraser studied the effects of consolation by watching a group of about 30 chimps at Chester Zoo in the UK. Over the course of 21 months, the team recorded any instances of group members biting, hitting, trampling, chasing or threatening each other. They noted which chimps were involved, who started it, how intense the fight was, who won and what happened afterwards.

Immediately after the dispute, the 'victims' showed clear signs of stress if they hadn't reconciled with their opponents. They behaved in ways that chimps do when they're anxious, including scratching and grooming themselves about three times more often than normal. Past studies have shown that acts of reconciliation between two fighters bring the levels of these behaviours down to normal and Fraser found that consolation does the same.

After conflicts, other chimps would often approach the loser and embrace, touch, groom or play with them. Chimps were more likely to behave in this way towards victims of violence who hadn't reconciled with their aggressor, a finding that's in line with earlier studies. Fraser showed that these acts of companionship alleviated the victims' stress and they performed anxious behaviours at levels indistinguishable from chimps that had not been involved in fights. 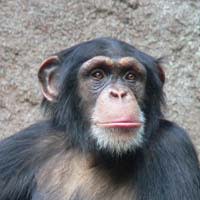 When Fraser looked at who was consoling whom, he found that acts of consolation were more likely to happen between individuals with valuable relationships. Chimps tended to comfort peers who groomed them frequently, shared food with them or gave them a hand in their own conflicts. Other factors like how closely related they were had no such effects.

Consolation certainly seems to be part of the social glue that binds communities of chimps together. Indeed, another study has suggested that consolation reduces the likelihood of further attacks from the group as a whole. So all parties concerned benefit from it.

Only the great apes (specifically humans, gorillas, chimps and bonobos) are convincingly known to console one another. Monkeys don't do it, and Aureli, together with eminent primatologist Frans de Waal, have previously speculated that consolation requires a level of empathy that only humans and apes possess. Perhaps, for example, apes are better than monkeys at working out how stressed other individuals are.

Fraser believes that his results lend weight to the idea that consoling is an example of "sympathetic concern", that is to say, consolers show concern about the state of their peers, and attempting to improve it. This idea has been put forward before, but until now, no one had demonstrated that consolation actually reduces stress. But Fraser notes that for the idea to be truly confirmed, it's important to also study the mental states of the consolers. Do they act to calm their peers, or are they simply reducing their own distress?

Fraser's work provides yet more evidence of the complex social world of chimps and the intelligent ways in which these animals behave toward one another.Not only that, but chimps are flexible in their behaviour. Those in this group limited their acts of empathy to individuals who they share valuable bonds with. The themes of social complexity, intelligence and flexible behaviour are themes that I will touch on again in the next post.