Chimpanzees Sway, Clap Their Hands When They Hear Music

While the chimps didn't match the beat, it's an indication they respond instinctively to sounds. 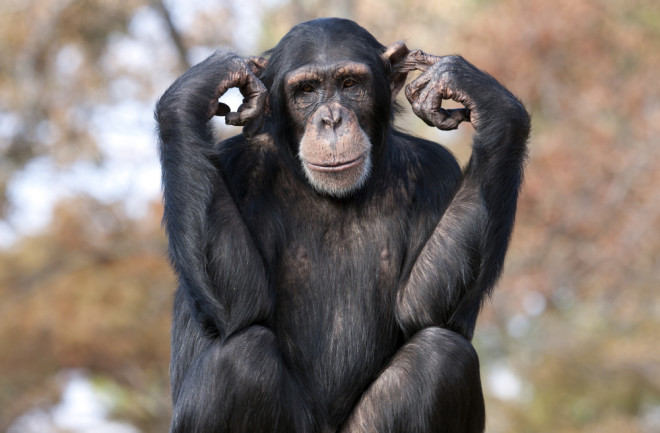 When humans hear music, our response is often instinctual. We sway back and forth, nod our heads or tap our feet. That innate urge to dance might not be confined to our species, either. A new study finds that chimps respond in much the same way to pieces of music.

When lab chimpanzees listened to a range of short piano pieces, they responded by rocking to-and-fro, and even sometimes clapping their hands. The chimps didn’t match the beat exactly, according to an analysis of their movements published in Proceedings of the National Academy of Sciences. But the monkeys kept their own rhythms, a response that echoes what chimpanzees do when they hear water pattering down.

Scientists used to think that moving rhythmically to a beat was something only humans do, writes study co-author Yuko Hattori, a primate behavior researcher at Kyoto University in Japan, via email. But recent research has shown that even parrots and sea lions can keep up. And if some of our closest primate relatives can do the same, then maybe the human instinct to dance reaches further back along our family tree than we realize.

When heavy rain starts to pour or waterfalls are nearby, wild male chimpanzees might stop and sway. Researchers have generally assumed it’s a natural response to overwhelming noise. But besides those observations, scientists don't know much about whether rhythmic noises might prompt animals to move, the authors write.

That’s why Hattori and her colleagues played some basic rhythms for seven chimpanzees at their university. Over six days, the chimpanzees listened to pianos playing simple rhythms anywhere between 75 beats per minute (think Aerosmith’s “Dream On”) and 188 beats per minute (like The Rolling Stones’ “She Smiled Sweetly”).

All seven chimps showed some rhythmic response to the music, to varying degrees. “There were large individual differences, ranging from a few tens of seconds to a couple of seconds,” Hattori says. One female tapped her foot, a few clapped their hands, and all but one stood on two feet to sway back and forth. One male in particular, Akira, was the most active, so the researchers spent extra time with him. When beats sped up, so did his swaying, says Hattori (though his rhythm still didn’t match the piano.)

It’s possible the chimps moved this way to soothe themselves when dealing with something irritating. But when the researchers gave Akira access to music played in another room, he would mosey over and spend more time near the source of the sound than when the speakers weren’t playing. The team doesn’t think he would do that if the tempo was aggravating.

It's also possible the chimps were responding simply to sound frequency and not rhythm. Akira "danced" to both music with a distinct rhythm and random, pattern-free noise, a sign that the chimps might not respond to rhythms in the same way we do.

That’s something the team plans to parse out in future research. And even if chimpanzees don’t have perfect responses to rhythm as some humans do, these swaying primates indicate that our instincts to move when we hear a beat might not just be ours alone.